Monday night after the race, I was treated to an epic Arizona Sunset: 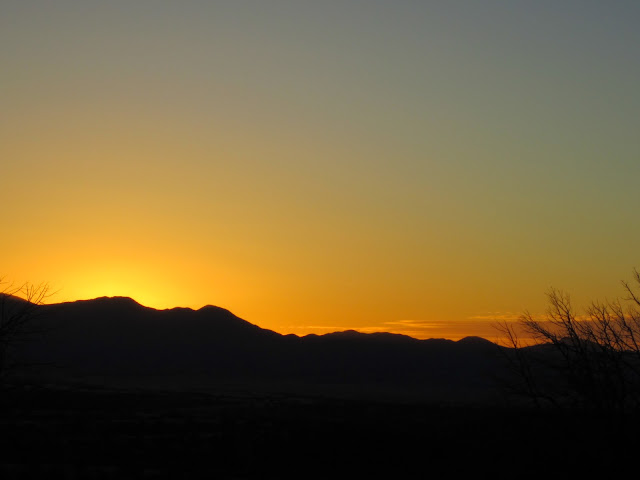 From my luxury suite in the Parker Canyon Mountain Hardware Hotel: 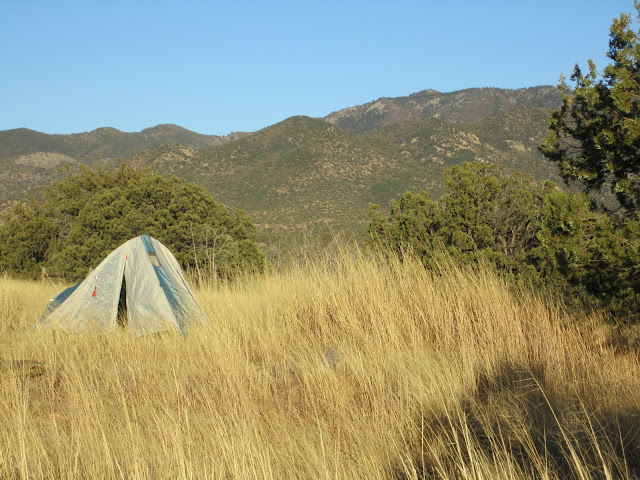 Plans for a 3 day excursion on the Arizona Trail after racing 24 OP turned into a 1 day, 31 mile ride at touring pace. My legs were a bit tired from the race and money (sigh) had a role in the slight plan change also, but such is life, right? I am very thankful to have gotten great weather this past Tuesday as I set off from my camp at Parker Canyon Lake.
My SPOT Track Progress Map of the route is here.
The Border Patrol made about six passes through the parking lot at the trail head where I was camped Monday night. My ancy black lab was as ready to be out of the car and on the trail as I was. So, for lack of anything else to do, we cruised around to expend some pent up dog energy, notching 3 or 4 miles of (pre)pre-riding.
The next morning, loaded with 90% of what will go with me for the real deal in April, I left a little after 10 AM. Rocky, loose trail coupled with fast, wide hardpack gives a good picture of the first section. I decided I was going to move at an easy pace, take pictures and just navigate along. The whole point of this was to become familiar with the trail and the terrain and get used to riding with more weight from my gear.


Soon I entered the Canelo Hills and did a fair bit of hike-a-biking. The steep ascents were loose, sandy and had tons of rock that was simply not ridable. I found the hike-a-bike to be relatively easy, but soon found myself just wanting to ride for more than 3 minutes before another big climb.


I met the Border Patrol on a double track descent and stopped for about 15 minutes to talk with them. I learned a lot about safety issues on the trail and just chatted about mountain biking in general. I have to admit, until I came to Arizona, I have never really thought twice about illegal immigrants. Something new to consider on return trips for sure. I am by no means paranoid, but now more aware.


My next encounter with another trail user came as I was ripping down a long, rocky, winding hill. I hit my brakes hard to miss the four or five goats (yes, that’s right, GOATS) that were bedded down under a tree. I heard their bells as they ran right over the top of their owner who was napping in the shade. I heard two dogs bark and jump up and I slowed to a stop.
Joe was the fellow’s name. He was from Montana and had his goats packed with his gear. No halters, leads or anything. "You couldn't run them off if you tried, " he told me. By Joe's side were two gorgeous black labs who immediately owned my heart. Twenty or thirty minutes of good conversation later, I was back to pedaling along.

I soon came to Canelo Pass and the trail completely changed. It became mostly a wide, fast double track through a meadow. There were many sandy riverbed crossings and a little route-finding, but my GPS tracks were dead on and the trail was marked very well. (Great job, Arizona). I opened and closed a million gates, cruised through herds of cattle, met two women riding horses that asked about my fear of drug runners and wanted to follow along for a while and finally came to some hills where I encountered some more hike-a bike sections.

After opening and closing a few more gates, I came to a steep, narrow, loose downhill. Deciding to ride a bit conservatively, I elected to put a foot down on some of the sketchy sections and walk my bike down a couple of nasty looking switchbacks. I came to Harshaw Rd right about 5 PM with one helluva sunburn and was ready for some good grub in Patagonia.


I really wanted to continue riding on past Patagonia the next day, but I had to return home back to the work grind. I have to be honest in saying that I don’t appreciate the inherent beauty of the desert even a fraction as much as I do the Rocky Mountains, but I am always up for exploring new trails and riding all kinds of terrain and conditions. My setup worked nicely. Steep descents weren’t an issue with my seatbag being so high, although I am going to fine tune the straps to eliminate the small amount of sway that did occur. I kind of anticipated this and took an extra strap along. I am pretty stoked that my gear is really light and I didn’t notice the added weight really at all. There were a few times as I was pushing my bike I would notice the presence of the seatbag, but barely enough to mention.
My shoes need some arch support which I will add when I return in March and I am still on the hunt for a top-tube bag that I like. Other than that, I am not going to change much on my next pre-ride on March 5th. This trip will include two overnights, so I will be packing more food.
Take-home impression:

I really dig this bikepacking thing.


Stay tuned for more coming your way in early March....