The One About The Guns

Let's start today's incessant rambling by taking a trip back to the mid 80's in rural eastern Oregon. I drove the feed truck for my dad before I could reach the pedals. He was on the back throwing off hay to the cows every morning before he went to work and I caught the school bus. There was always a .30-06 or a .222 in the front seat--stock against the seat, barrel on the floorboard. And a .22 in the gun rack. That was totally normal. Coyotes and badgers were the target. An occasional old cow who was suffering had to be destroyed out of mercy.

Fall meant hunting season. Hunting meant time off school and a huge elk camp. My dad and all his brothers knew where every deer and every elk in Grant County was and the patterns and weather in which they moved. This is evidenced by the amazing bucks and bulls on the walls of all their houses. Some people drop thousands of dollars to kill game like these. Not my family. It was just a way of life. We all had guns. I took hunter's safety. I shot a tiny buck in Council, ID when I was 21 and cried. I never pulled the trigger on a mammal again. That's just me. I was not hungry when I shot that buck and I personally prefer to see them alive and running through hay fields. If I was hungry, I would feel differently. I support those who hunt for sport. I have packed elk and deer out on horses and ATVs. I have helped skin and gut. I just cannot kill a deer or elk. My deal--no judgment or condemnation whatsoever to anyone who hunts.

Then I started working at a retriever kennel and subsequently hunting pheasants, ducks and geese. I bought a Beretta Urika AL391. God, I loved that gun. I shot a lot of clay targets and some birds. But I genuinely loved to see the dogs retrieve. It was in their blood, it was innate. I loved to watch my labs shake with excitement. I was observing pure instinct and DNA programmed to do nothing else. When I got my gun out, my dog knew what was going on. Gunshots meant it was time for her to find a bird. We were both in heaven. I moved to Colorado, knew absolutely no one who hunted waterfowl, my dog got old and I sold my gun at a show for money to buy a mountain bike.

Yes, I owned a gun. A semi-automatic, gas operated 12 gauge. I was stoked to not have to pump it like my brother's 870 I had been shooting. I drooled for months over the Bennelli SBE with inertia recoil, but it was out of my price range at the time.

My dad taught me everything about guns. How to shoot, what they were for, where they were kept, how they were to be cleaned, and most of all safety and respect. They were tools. My brothers and I knew they were not to shoot people and being stupid with them meant someone was going to get killed. So we weren't stupid with them. Because guns are tools. Tools to get dinner, tools to shoot targets, tools to have mercy on suffering animals or protect baby calves and the cats.

I would never trade how or where I grew up. I am who I am because I had parents who loved us more than they loved themselves. They knew they were responsible for cultivating little humans into good people and responsible citizens. Salt of the earth, kind, caring, hardworking people, my mom and dad spent time with us. They talked to us, taught us, made us work, supported us to follow our dreams and worked hard to raise us. We weren't rich, but we never went hungry, we always had clothes and they sacrificed so I could play every sport out there and compete with my horses. They did an amazing job. And it was a hard job, because my bothers were both absolute hellions in high school. I say that with loving humor. They were small-town boys who raised hell in a small town. They grew out of it eventually and we all laugh about the antics they will admit to today. I vehemently disagree with the political views most of the county promotes. I never did agree with any of it, and never will. My heart screamed out different views based on, ironically, the fact that I was taught to love and respect ALL people, not just those people like me. But, whoa there, Jill, this is a can of worms that doesn't need spilled here. Simmer down, everyone. I lovingly agree to disagree.

So, now, lets jump back to a couple of months before I was at the Route 91 Festival in Las Vegas:

On the night of some supposed meteor shower, a friend and I loaded up firewood, bikes and guns and headed up Missionary Ridge Road. We built a huge fire, solved the world's problems from the two lawn chairs we held down for hours and talked about our ride the next morning. The meteor shower only yielded one spectacular burst of light I saw from my sleeping bag and the impending pedal adventure and the thought of shooting some big guns the next day were the two things on my mind before hitting dreamland.

The following afternoon, a black case holding some kind of big gun with a huge clip appeared in front of me. It was a spectacular feeling to shoot a bazillion rounds into a plywood target. The force that splintered the wood was exhilarating and my respect for that kind of firearm and the people who shoot them accurately for sport, deepened. The handgun I shot after my friend unloaded the clip and mowed down a young Aspen tree could not hold a candle to the excitement I felt shooting a rifle like that.

Because of how I was raised, I had no fear of the gun. I was full of respect and awe. As I am not primarily composed of testosterone, I did not feel powerful or aggressive or violent. I did not grunt or spit or yell "Murica!!"  But most poignantly, I never once thought about taking another human or an animal's life with this type of gun. This gun is meant to be shot at targets.

Responsible, ethical, law-abiding gun owners know this. They do and should have the right to bear arms. They know that guns are tools. Tools for sport and tools for protection if needed. They have respect for this tool and use it responsibly.

Is all of America composed of non-violent, benevolent citizens who uphold the values in the previous paragraph?

Do we live in a country where violent shootouts don't occur on the big screen and glamorize killing people to make millions? Are there are no violent ideas and effects that seep into minds of both young and old?

Do we live in a country where the NRA pumps more money into mental health education and care than the Trump campaign? Do they fund art and sports programs for schools to provide alternatives to gangs and violence like they fund Congress?

Do we live in a world that is supportive of all views, colors, shapes, sizes, beliefs?

If you have been living a life void of social media, the internet, newspapers and TV, send me an email and I will give you the answers to these questions. And probably ask under which rock I can join you. Otherwise, we all know the answers, so I will spare myself the needless keystrokes.

This leads me to more questions:

How would you feel if the person you loved the most on this planet was one of the 59 you will only see in pictures from now on?

Or how would you feel if your child was gunned down at Sandy Hook right before Christmas?

What if your Colorado mountain wedding was in a month and your fiancee decided she wanted to see Heath Ledger play the joker in Aurora?

I kick myself for not speaking out more and speaking out loudly until I was the one who was running for my life because these guns (THESE EXACT GUNS) were being fired at me. Look closely. See those shells? They are the remnants of death, pain and suffering. 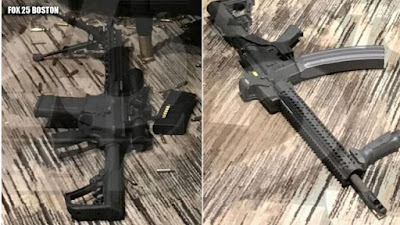 These are two of the guns that stopped the hearts of  59 people who did nothing to deserve it.

The arguments "people kill people, guns don't kill people" "maniacs will get the guns somehow and continue" are outdated, incredibly selfish, extremely weak and hold no validity any longer. Taking a look at the number of people slaughtered for no reason and the number of occurrences should give any one with a shred of a conscience the sense of urgency to advocate for legislation to at least STOP these maniacs from obtaining 33 guns LEGALLY.

Perhaps the sentence that is plastered on the window of the NRA headquarters "if they can ban one, they can ban them all" infuriates and deeply saddens me the most. This is a disgusting use of one of the greatest forms of control of people--fear. There is no proof or logic or validity to that statement, but people will believe it and not even question it. They will band together in the name of fear of losing all their guns and polarity is created. Sickening!


Well, I opened the can I said I wouldn't. But I owe it to every one who died in Vegas and all the massacres prior to Vegas. My heart won't let me stay quiet any longer. The right thing to do (the way I was taught by my parents and my rural community) is to be part of a solution, not just a self-centered bystander too scared to speak up!

Below is a diagram. I was standing in the red that outlines the white dot.

Yeah. That's where I was standing. 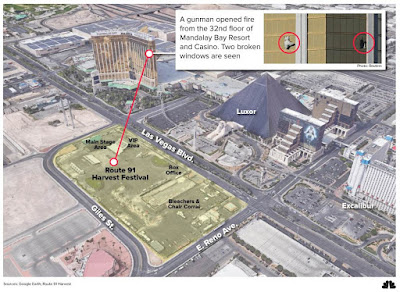 Eric Church wrote a song titled "Why Not Me?" I have not listened to it yet. It will break me. I am not healed enough yet to process it in a healthy way. Why? It was the same question I was asking myself as I was hiding by the tire of a Ford truck in a parking garage, realizing I was going to live after running for my life. I do not even know why my brain went there. I cannot give you a clear answer yet. Pretty messed up, huh?

I write to heal. I write to inspire. Its raw and its real. I pray it stirs SOMETHING inside of you to do what you know is right. We don't live in 1791 (the year the Bill of Rights was adopted), we don't live in 1971 or even 1991 anymore. This is 2017. The weapons (and the number he stockpiled) the killer used must be made harder to obtain legally. Stop being controlled by fear of losing ol' Betsy and your favorite elk rifle. You are not going to lose those guns!! Stop being told what to think. Reject the bullshit you are being fed with a spoon that intelligent, strict gun-control legislation aimed at preventing massacres will result in you losing all your guns.

We (yes, we the ones who are living) owe it to those who are now dead at the hands of maniacs with guns they should not have acquired legally to reject this fear, get off our asses and do something! 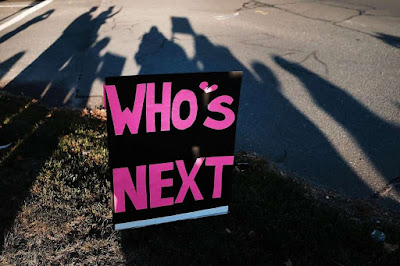