Awakening to an iconic Moab sunrise set the tone for my day. I simply sat up and slowly took in the most air my lungs could hold. I tasted the clear crispness of the breath for as long as I could and exhaled. I exhaled the constant go of the city and work. Without thinking, I reached over to pet my old shadow out of years and years of habit, but instantly remembered that she couldn't make the trip this time. Old dogs don't do so well for ten hours in a car.....

I had already packed everything the night before and laid my clothes out on the dashboard like the first day of first grade, so I was ready in record time and turning the crank just before sunrise. Pedaling back the same way I had driven in, Mineral Bottom Road was feeling much better than the last time I was here in subzero temperatures. I quickly came to Hwy 313, turned right and spun all the way to the park entrance. I watched a sunrise and thought about my goals for the ride:

1) Ride smoothly and consistently
2) Be EFFICIENT

I paid my entrance fee of five bucks and tore down the Schafer Switchbacks. In my mind I was this guy:

The trail undulated along and I felt like a ten year old getting let out to recess. I looked down at my Garmin and was surprised at the pace, so I backed off a bit and focused on smoothness, consistency and form.

For the most part anyway.

The views are classic Moab, so a fair bit of my attention was diverted as I took in the serenity and cherished the peace and solitude given to me on a gorgeous Saturday morning in March. The wind was constantly at my face, but that is usually a given. Wishing for a calm day wasn't going to do me any good, so I rode on in bliss. A handful of people came out and about as the morning wore on, but the total number of jeeps and motorized vehicles I saw all day was four.

The wind started to pick up and its power-sucking presence started to nag at me. Heading in a generally southward direction until about mile 50-55 I think made it very tolerable, however, around mile 56-60, the forecast 40 mph gusts made their cameo, and I had finally had to duck behind a rock for some reprieve. 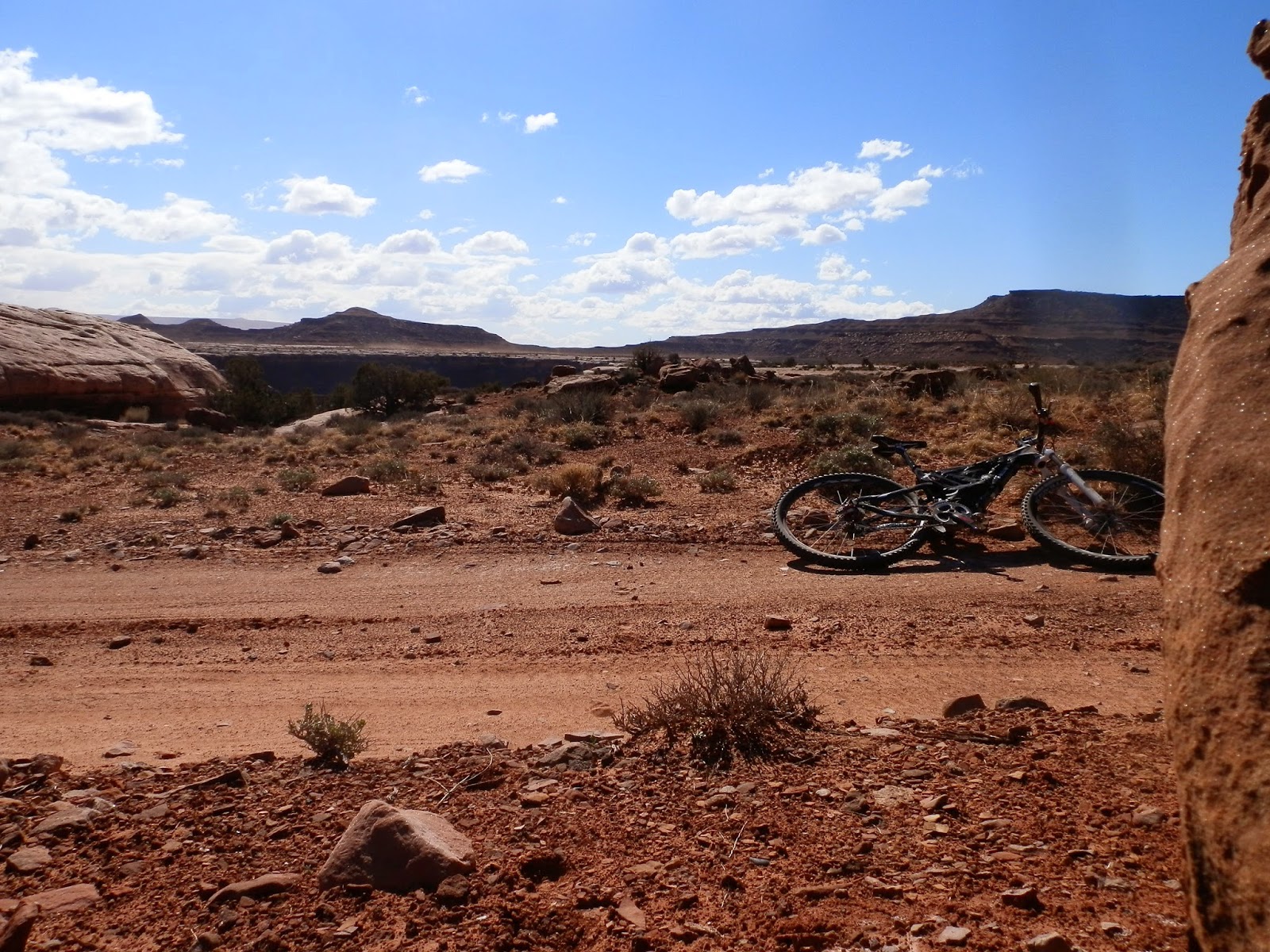 The climbing and the wind increased substantially from this point to the end. The "noticeable" headwind became a big, ugly bully the rest of the way. I thought how nice it would be to ride this whole thing minus this significant power suck, but just shrugged my shoulders and continued on thinking more and more about riding as smoothly and evenly as possible, rolling with the punches the wind was delivering and being efficient when stopping. Although it seemed I didn't stop much.

There were times when the wind would push my whole bike too close (for even my comfort!) to the rim and times where the sand in the trail was so deep I had trouble even moving. So I decided to duck into the cover of one of the outhouses at the top of Murphy's and take my third and last picture of the ride:

I pushed up Hardscrabble and rode back to the car after climbing the Horsethief Switchbacks at mile 99. It is a good climb that begins as a huge mental challenge when standing at the boat ramp, but as soon as the crank turns, it is much easier than one would think.

I loaded up and was met by this guy on the way out: 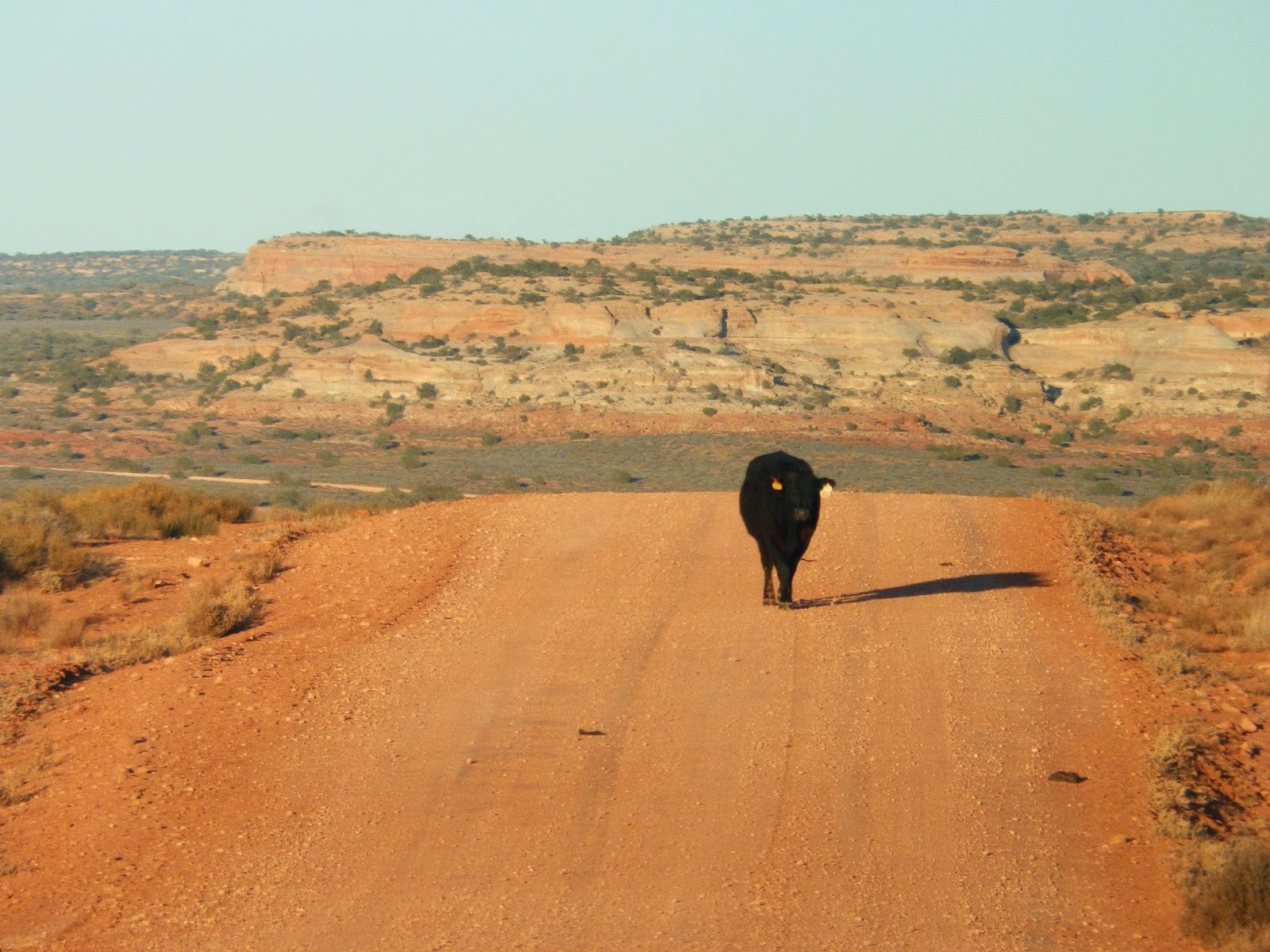 I rolled into town. met up with some old friends, met some new friends and enjoyed a chill night of laughs and jokes before falling asleep early. The next morning was not an early start (very foreign but welcomed) and we ended up riding 3ish hours total, at a fun, casual pace on trails I had never ridden. Nothing special, but it felt great to ride strong after a century instead of feeling the exhausted leg burn as I had all last spring.

I leave you with the day in pics and the routes to wrap up a good time in Moab. Having ridden there a million times, each trip holds its own unique memories whether it be the people, the bikes, the trails or the races. What ever it is, life is always damn good in Moab....