I remember the first time I ever saw a "Fat" bike. I was at my third mountain bike race ever, the 2011 edition of 24 Hours in the Old Pueblo and I followed one for about a half mile through the cholla. The pilot was wearing a ripped cutoff shirt and pretty much grinning from ear to ear and chatting me up the whole time. I remember him bouncing along really not caring about much except the fact he was on his bike. I began giggling to myself as I passed by and kept snickering for about 5 minutes after.

I think this is when the seed was planted....

I saw one again about a month later in Telluride, CO and I remember saying out loud to my friend:

"I am going to have one of those someday..."

I never thought I would ever RACE the fatty. Nah, I was really just intending  to play in the snow, get groceries and generally take it out to make myself continue to giggle at the fact that I am rolling on 4 psi and 4" tires. But when my buddy, Judd, (because his link NEVER works its backofthepackracing.com) sent me the link to the Equinox Snow Challenge in West Yellowstone, MT in January, I knew I was in for sure. I didn't have a fully functioning race machine frankenbiked together just yet, but I knew something would come together by race day.

If you follow my silly adventures, you will remember the first (ugly) edition with the 2.4 on the 1x1 frame...ok, stop laughing!!! 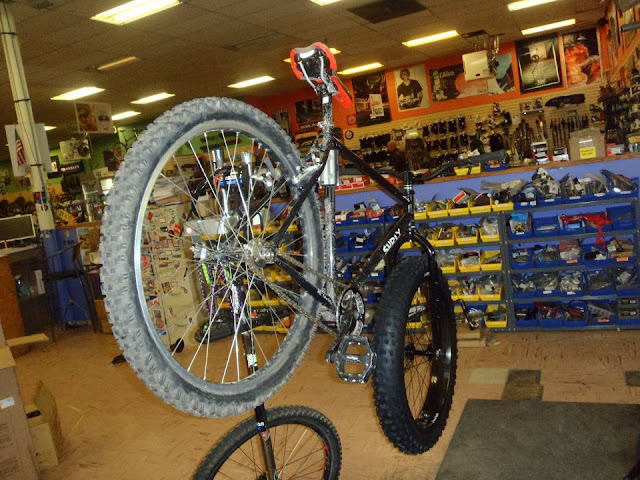 Which finally evolved into this hotty:


So two days before raceday, I lubed the chain, threw it in the back of a New Mexico plated Yukon with a titanium sheep and headed north through the greater part of Utah to ride in circles on the snow for 24 hours.

Here is the course (image stolen from Judd): 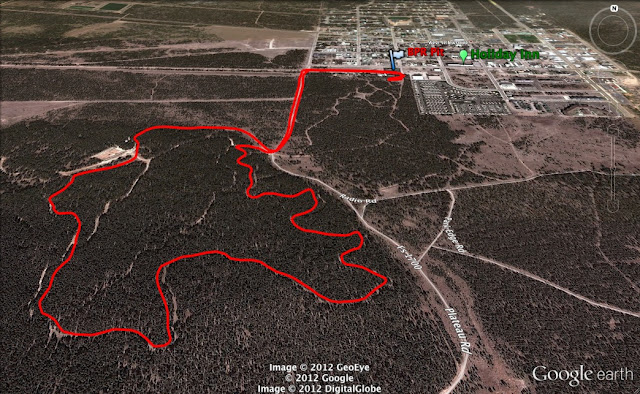 We arrived on Thursday night, crashed out in the Holiday Inn a block (as you  can see above) from the start line and got up the next morning hungry for a good breakfast. 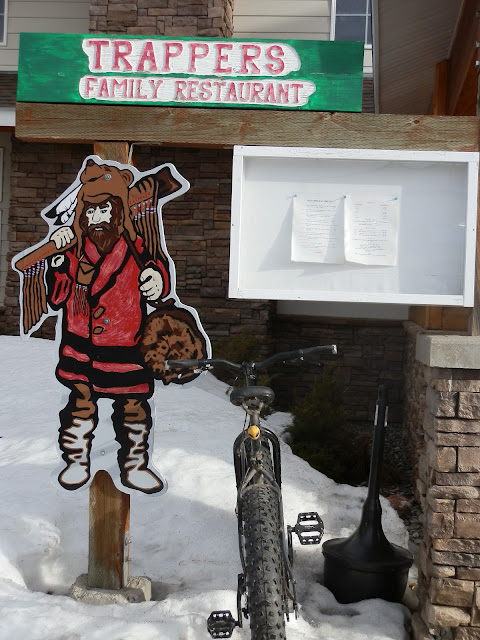 And some white hot chocolate: 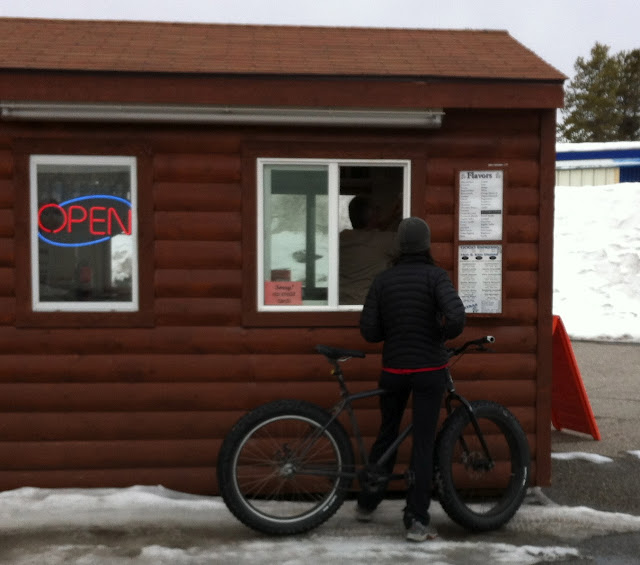 We met up with Ken and Ben and pitched in with some trail building (read: playing) later that afternoon to help out race director, Sam: 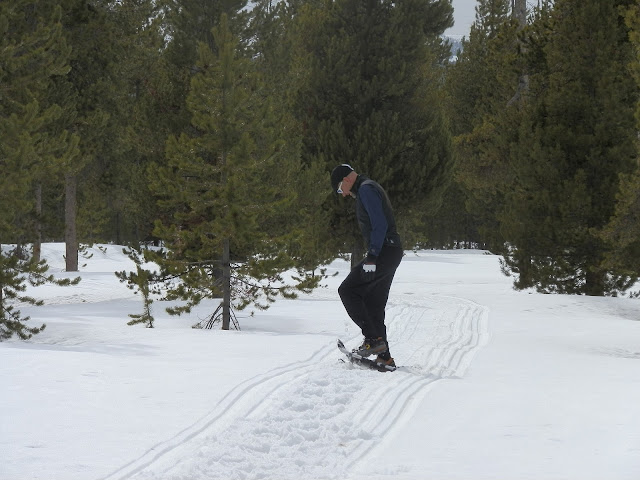 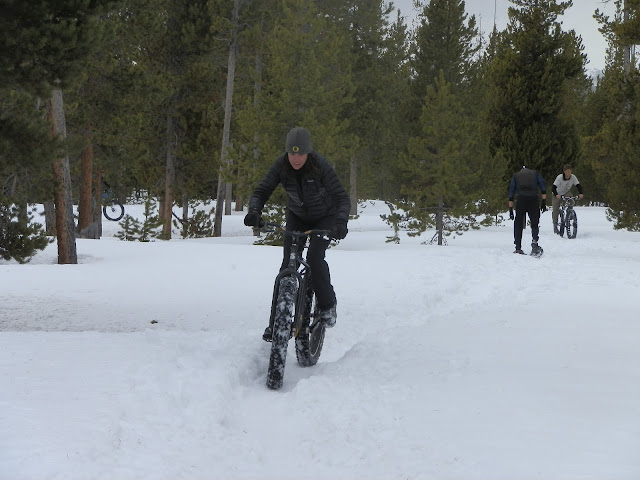 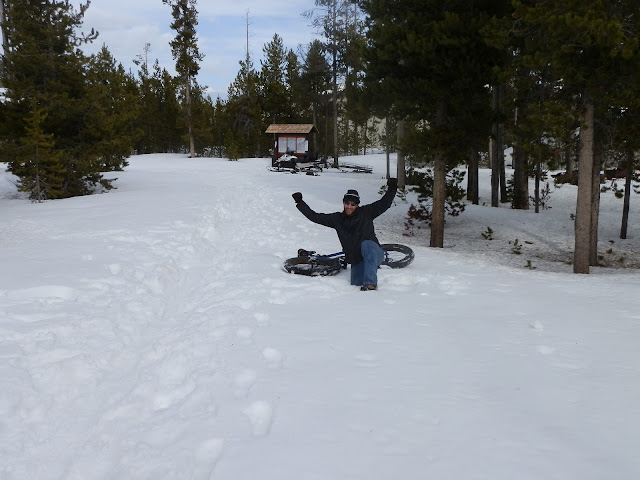 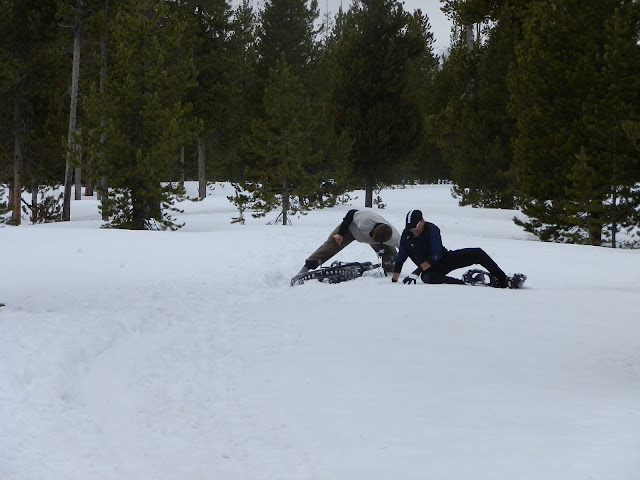 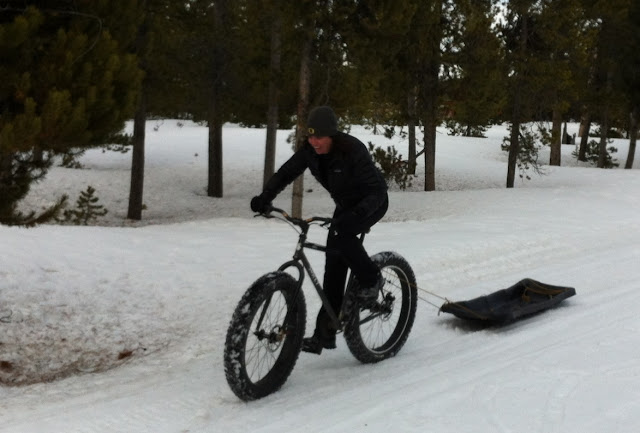 The race started at 10AM on Saturday and our gang was ready: 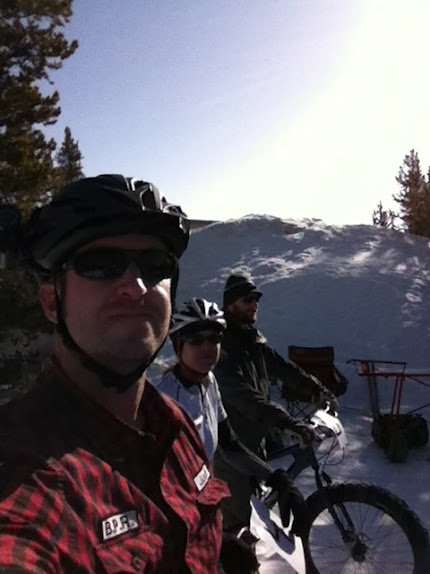 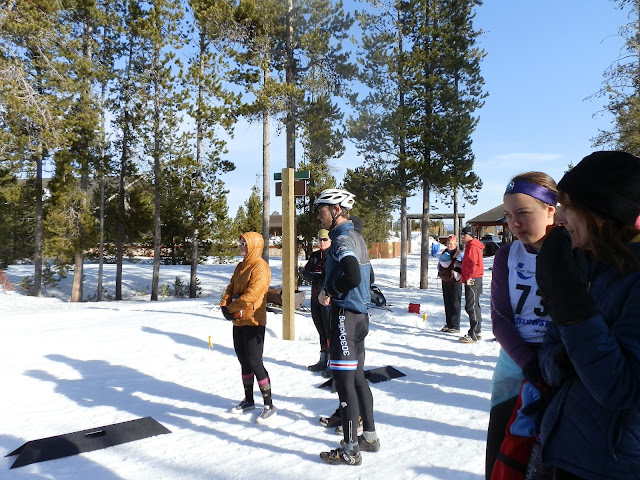 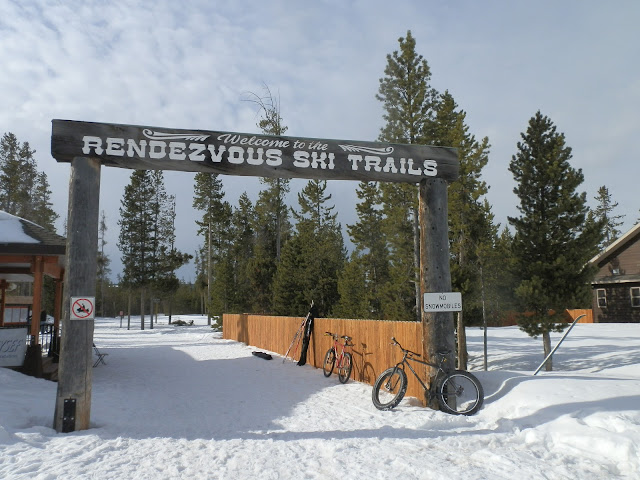 And here is a video from Judd (also on his blog, which is a great read!) of the whole ordeal:

I set a goal of 30 laps before the race. I brought light to ride all night and did so except for an hour I spent horizontal inside a down coat and sleeping bag around 12:30AM warming up. The course was short with really only four hills to climb. They hurt on 36/20 at about 2 AM, so I walked them.

The "demons" of 24 hour racing usually come out around 2 AM in normal races. Lap times get longer, wheels turn slower and we all long for sunrise and the added burst of everything it brings. This race however was exactly the opposite. At 10AM  the course was like riding asphalt but temperatures increasing to the upper 40's (F) made riding between about 12:30PM and 10:30PM brutal. Lap times for all the bikes increased by about 20 minutes (yeah, no kidding).The last 1/4 mile before the exchange tent was by far the worst. Imagine taking the lightest, skinniest road bike tires out there and riding them in the deepest sand possible. Yep, that was about how fast progress felt. At 5pm, that quarter mile of the course officially changed to the parallel paved road  give some relief. This definitely helped with demon warfare!

This race to me was a mental challenge more than anything. I pushed a huge gear for 120 miles. My goal was to find a sustainable pace, hold it and have fun. I reached my goal in 22 hours, stopped, laid my bike down by the fire and made some hot chocolate. I fought through the ten hours of slush with no more than some light-hearted, meaningless sarcastic jokes about my sanity for doing so. But most of all, I was just happy to be riding my fatbike in the mountains..... 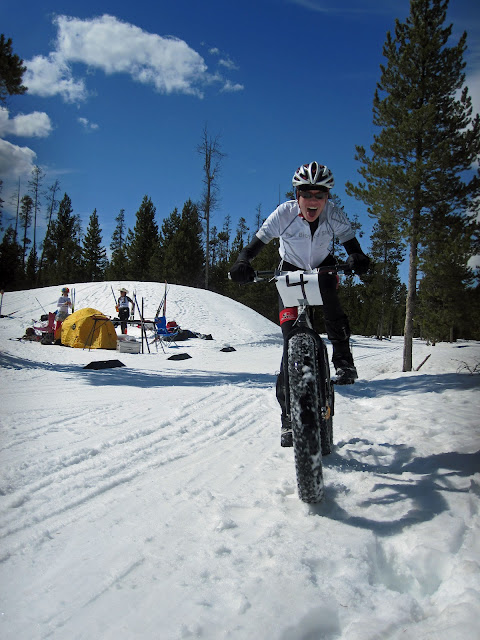 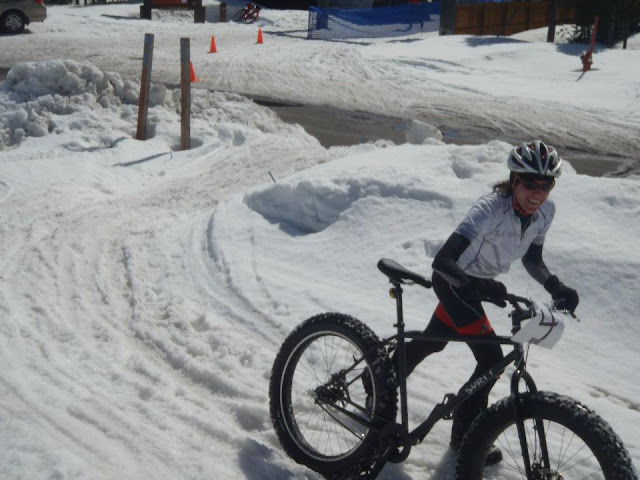 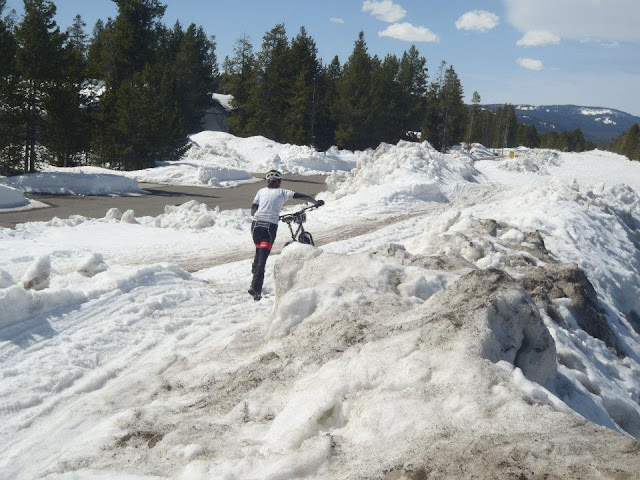 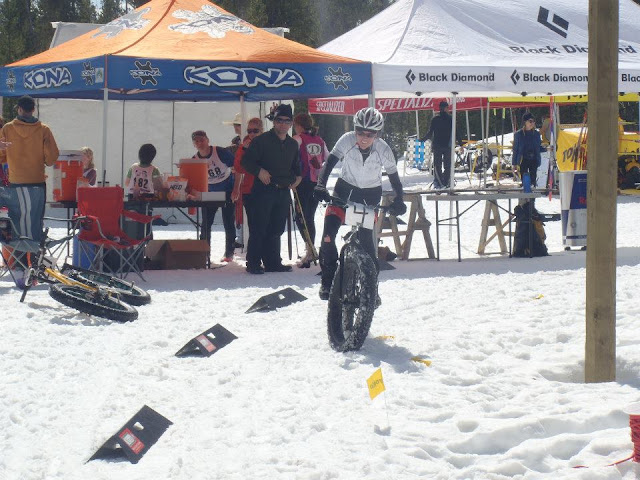 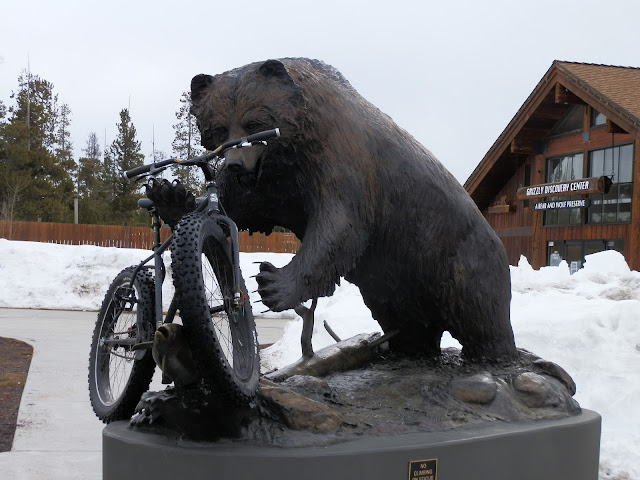 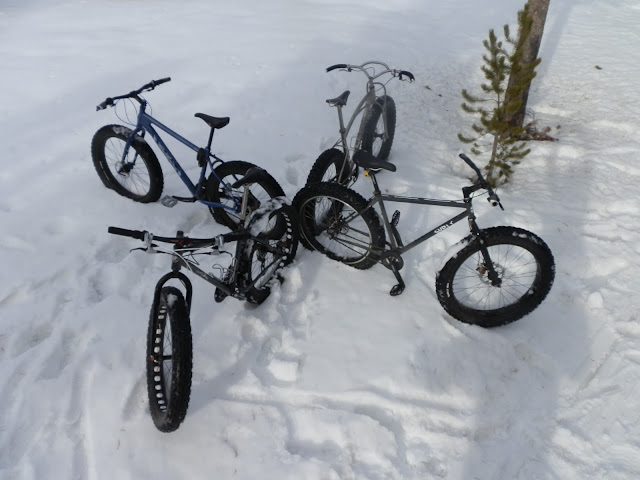 I ended up 2nd place 24 hour solo female (skis and bikes were all in one division) and 7th overall 24 hr solo. It was no means a highly competitive event, but the only one of its kind in existence thus far (?). A huge thanks to the Forest Service in West Yellowstone for issuing permits that allowed the fat tires on the ski trails and the angel of a groomer, Jay Pape, who volunteered his time. He was my favorite person on the planet at about 11PM Saturday night.

Good times. Good people. Good views of the mountains in a beautiful corner of the world. Thanks to Judd, Kevin, Ben and Ken!

Good training for AZT which is now 10 days away....

I am admittedly way behind in the world of BLOG. (There is a direct correlation, however, between this and the time of year as we all know). I have a ton more pictures and stories from last week to post in the next couple of days. More snowbike summits, Hartman Rocks riding and camping, and some riding in Fruita.....Then a final wrap up on the whole AZT 750 prep (I promise a more introspective look) before I totally unplug from society (yeah!), jump on my bike with a few things at the border and head for Utah....

So stay tuned...its going to be one helluva ride! 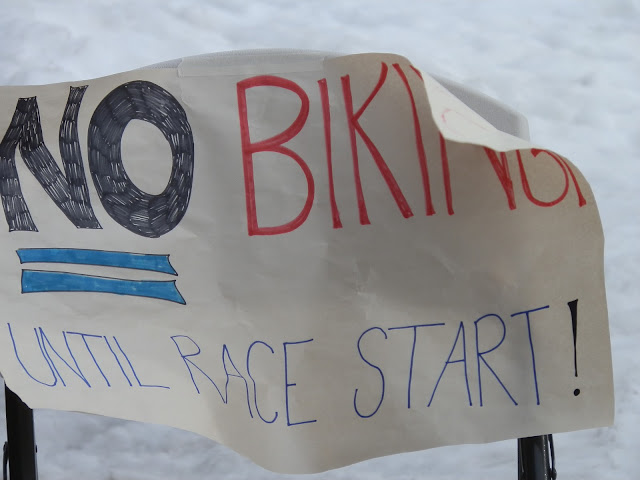 Once the race starts, of course....