I rolled into Colorado Springs this past Saturday with virtually no nerves. My partner, Erick, agreed to take the first lap in our third coed duo effort this season.  The start line is always a gut-wrenching experience for me and since I wasn’t toeing the line to run through the grass, I felt pretty calm. I had been on the course a few times and was feeling comfortable with it.  Now racing with the guys from the Trek Bicycle Store, we were camped next to them and I was ready to put some miles on a new kit. 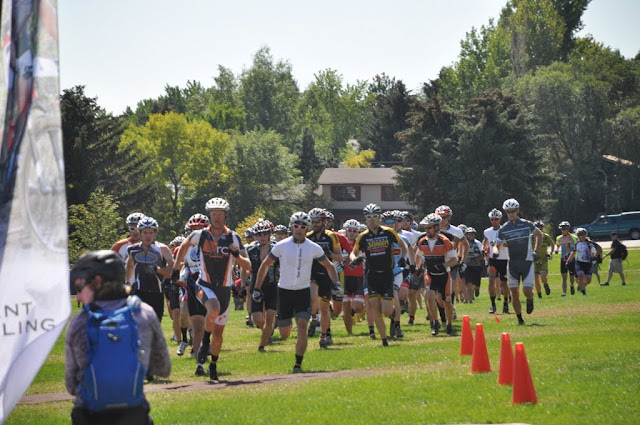 Erick absolutely smoked the first lap. It was the fastest he has ridden all year—a truly impressive 1:04 started us out. 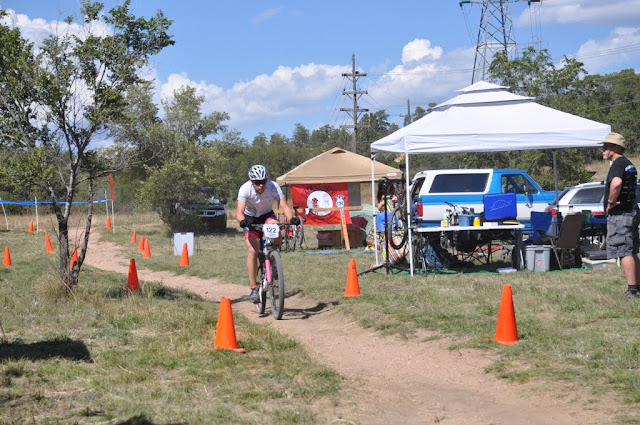 I clocked a slower than expected time--a sloppy 1:14 for my first lap.

(There is no pictorial evidence in my possession that I was ever on a bike at all this past weekend...hmmm...so imagine a photo HERE)

We alternated laps until the sun came up the next morning. I was lucky enough to get both the sunset and sunrise lap. Other than the two gigantic chickens that danced around clucking and flapping their wings in front of me somewhere in the wee hours of the morning, the major highlight was the “purple mountain majesty” glowing off Pike’s Peak at sunrise. It made me almost forget about the fact that you can buy a double cheeseburger at the top in the gift shop. Almost. 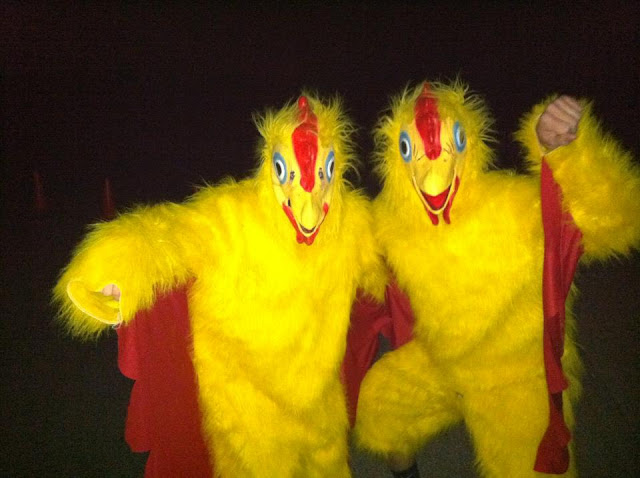 The turnout for the coed duo was disappointingly low. Only four teams made up the category. The race officials did not update any lap times during the night but Cameron Brennemen threw down his first three laps each in under 1 hour. Smokin’!! Nina Baum was riding strong at 5-10 minutes faster than me. She caught and passed me somewhere in the night and we rode together for a bit laughing and joking at how we were only seeing women out on the course. I love meeting new and inspiring people who have accomplished a great deal on a bike. I respect them a great deal and receiving encouragement always means a lot and keeps me going on tough days when I question whether or not I have the talent to be out here. So for this, thanks Nina! These are three things I have been shooting for since last October when this whole dream started:

"Strong, relaxed and positive on a middle-of-the-night lap. That's the way to be." :-) 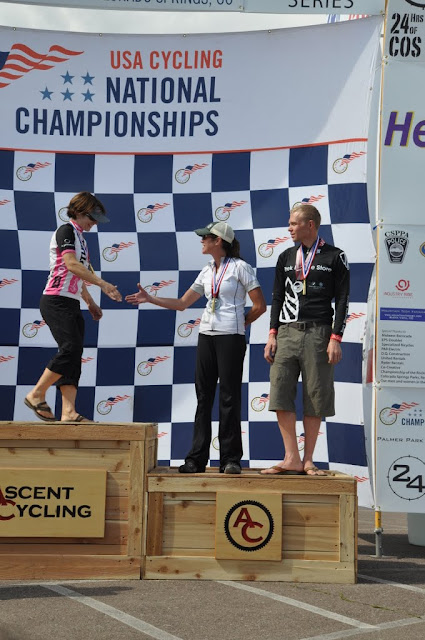 The third place team was riding townies and at 9AM when times were posted, we were a full four laps ahead of the townie team and a full four laps behind Cameron and Nina. Double checking with a USAC official (who manually pulled times for us), showed that to lose the silver medal, the townie team had to put up 4 laps in three hours with their fastest lap being 1:40 and their most recent 3:29.

The podium was mathematically set and that was it for me. Riding another lap was not going to change the overall results in anyway and it was time to save my legs and be wise. Erick chilled out and rested for a while and then decided to ride his 9th lap to commemorate and celebrate the end of a great season of racing for him. It was an honor to stand on the podium three out of three times this year with a great person and partner! 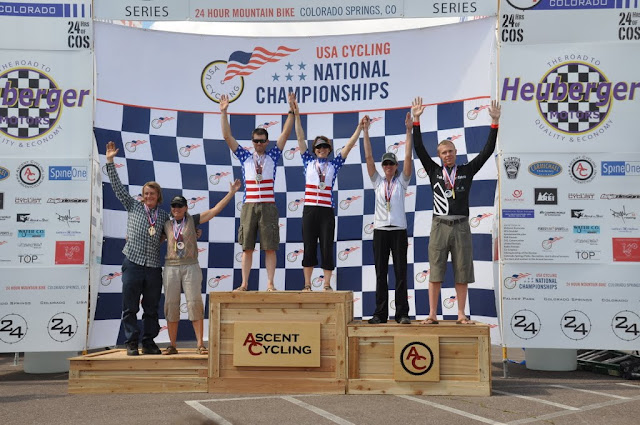 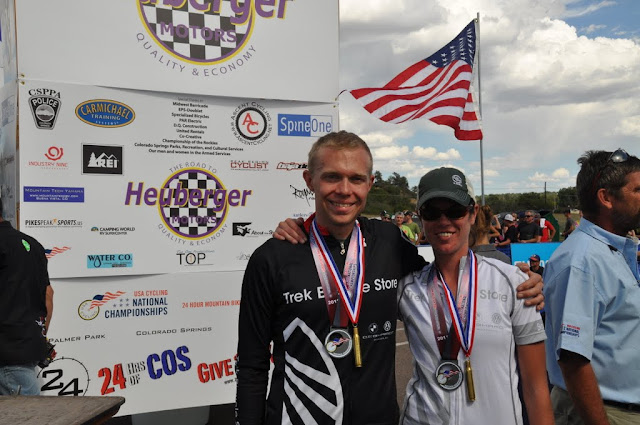 Two other friends, Michael Scott and Jeremy Young took silver in the male duo category. They were consistent, fast and strong throughout. Wow, guys! Awesome work! I was really happy to watch another Trek Store racer, Jonathan Davis, stand on the men's solo podium. Congrats! 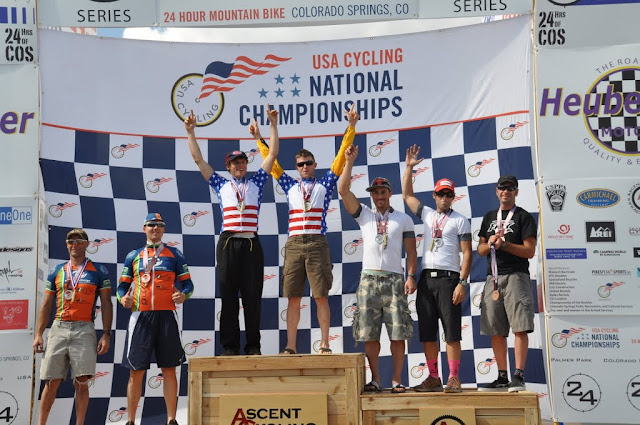 And because everyone seems to have a small world story, I will add mine to the mix. I ran into my childhood friend from back in John Day, OR who was there running support for her husband and his first podium at Nationals in the solo male division. I am so stoked for you, Jennifer and Nate!!! Huge congrats!  The power, speed and unrelenting effort I see in these guys as they blow by me on the trail is incredible and very inspiring.

I have the utmost appreciation for the support I received from the Trek Store Team. I respect the talent and dedication I saw in these guys. The bar is set high and the structure within the team exists to help lift them to the next level. It was an extremely positive and encouraging atmosphere and the enthusiasm from their families and friends was awesome to see.

So yeah, 24 Hours Nats is in the books for 2011. I learned many things about racing and people, I rode well, I rode sloppy, loved the course, hated the course, slept about 30 minutes and am very grateful to Jim Dukes, Drew Brown and Zack Hoh for illuminating my night laps to the max. Thanks guys for helping keep the rubber side down in the dark here and in Moab this weekend!

This would be a great place to end this blog post, however, I can't help but mention a very mysterious object along the race course that exerts great power over mortals. The pink futon. It is virtually impossible to explain or resist. Surrounded by sleeping sheep, it repels derailleurs and has the inward pull of a strong vacuum. When Coke and pizza are added--lap count and lap times fall into extreme danger.... 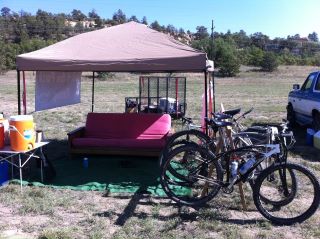