A New Kind of Epic

Returning from AZT Recon Mission #2 last week had me smiling as I looked back at ten days on which I could never put a price. From 78 degree days in the desert on flowy, sweet singletrack and the snowy, windy hike-a-bike of Oracle Ridge in Arizona to Telluride, ice falls and the steep slopes of the San Juans, I savored every second of the diversity, beauty and adventure encountered on this epic excursion.

First, some of the lighter moments: 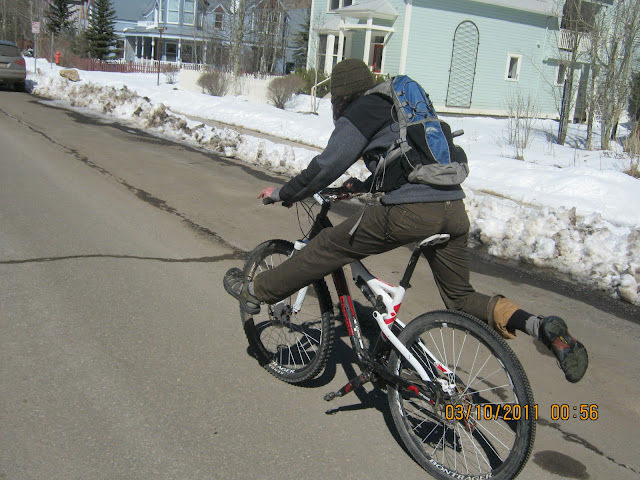 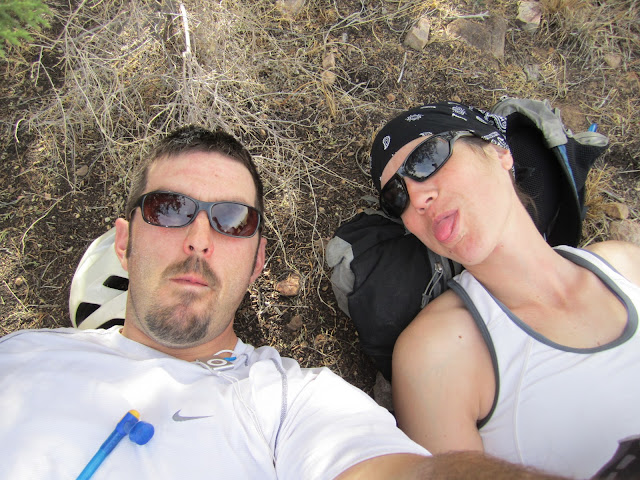 And, now the rest of the story!

Day 1 began at 3AM as I removed the work shackles and finished up some last minute packing prior to heading to the airport. Destination: Tucson International. I slept from wheels up to wheels down and got off the plane a bit groggy. I soon found the perfect couch to crash for about an hour as I waited for my cohort in crime to pick me up.
With two huge grins and notions of epic to ensue, we set out for Patagonia to retrieve my gear I had stored. I knew I was back in southern AZ as this sign was everywhere....Yes, this is an AK-47 and no, it is not mine: 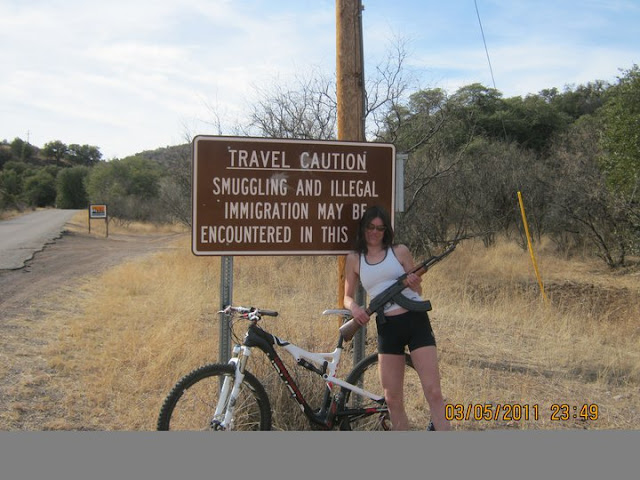 We set up camp just outside of Patagonia that night and the next morning after some quick bike assembly, we started the first day of riding near Kentucky Camp. Riding rollercoaster-like double track dirt roads for about an hour, we caught the official AZ Trail and after some rolling singletrack, pictures and good conversation with a couple of old cowboys, we railed some sweet downhill switchbacks. Crossing sandy riverbeds, climbing steep, loose trail and finally topping out on a hill full of cactus, I got a great feel for the sections paralleling Highway 82. I felt strong on the bike and generally had fun with all the ups and downs. This section is much easier and faster to ride than the Canelo Hills portion I had ridden a couple weeks before. 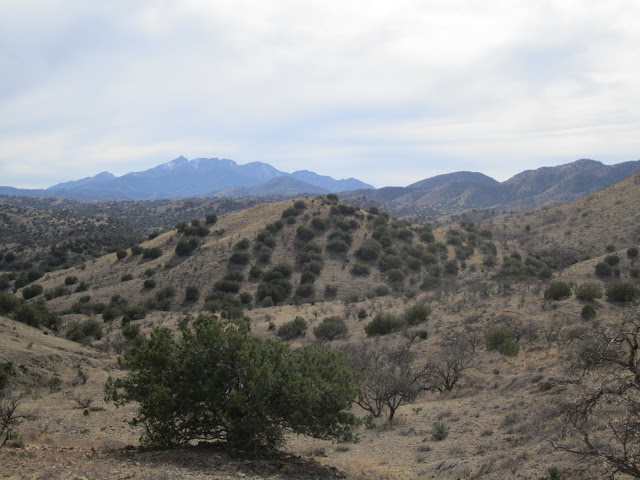 Later that afternoon, we decided to split up and I continued on to I-10, exited the trail and started heading south on 82, keeping my eyes peeled for a black Tundra coming north to pick me up. The evening sun was lazily dropping behind the Santa Ritas and a serene, brilliant Arizona sky beckoned from the west.
Flat total: Steve 1…Jill 0
Crash total: Steve 0…Jill 1 (minor downhill crash, cut up right knee…meh..not too impressive)
We hit up some much appreciated showers in Tucson then up to 8K’ to Summerhaven. Twisting and winding up the highway gave great views of the lights of the city below. We found a good camp spot and had a cooler loaded with fresh veggies, chicken and aluminum foil to cook in the campfire. Our grandiose dinner expectations were doused when 47 mph winds shook the truck. Summoning the motivation to brave the cold gusts, we unloaded bikes and gear, jumped into warm, down sleeping bags and were one with the wind (ha!) as we dozed off in the bed of the truck.
Hoping our old friend the wind had left the next morning, we sat up and were greeted by this: 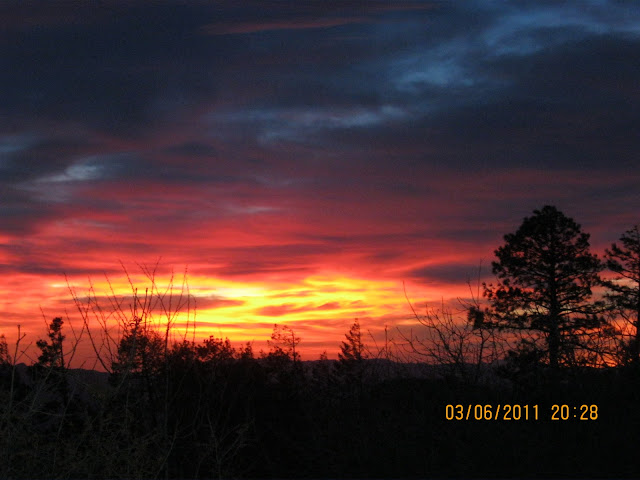 The wind decided to stick around for the rest of the day and accompany me on the section of the trail I wanted to ride the most—Oracle Ridge. Starting just off the highway, it immediately climbs up a steep, rocky hillside. Traversing upward, I was stunned by the view. The trail continued to climb through trees, bushes and was soon snow-covered. I hovered back and forth between riding and hike-a-bike for awhile. The trail got steeper, rockier and a bit muddy and I carried and pushed my bike for quite awhile through many unrideable sections. The wind was relentless and many times I was pushed completely off the trail as I pedaled along. Once on top of the ridge, I was in complete awe of the state for which I previously had no desire to visit. The exposure of the ridge let the wind rip through me and I found myself snickering as I picked first myself up and then my bike off its side. Yep, a huge gust completely tipped me over right into a nice, hard rock.

At that point, I was over all this fun in the wind and retreated back to the highway and the smart one who was napping in the truck waiting for me. Plans for a night ride were drawn up and Steve rocked an 18 mile descent of Mt. Lemmon on his mountain bike. We parked near I-10 that evening, packed up and were treated to pure, sweet, sugary singletrack through the saguaros. The sky was perfectly clear and the stars were enormous. The moon was like the grin of a Cheshire cat and I soon entered a blissful trance as we sailed through the peaceful desert. The ride was effortless, my bike seemed to propel itself and I honestly can’t remember ever contracting a muscle to pedal. We rode along for miles and came to some rocky ups and downs. The rocks on this section were gnarly, tricky and jagged. I heard a loud thud just behind me and Steve was holding his knee. OUCH. No bueno.
Seemingly alright, we went on a little farther until he noticed a good stream of blood that had run down his shin. This cut was definitely more impressive on the carnage scale than mine, so we cleaned it up and decided to hunt for a good spot to camp for the night.
Deemed the Saguaro Suite, we cleared away rocks, unloaded the bike packs and laid out sleeping bags. I climbed into my emergency bivvy that I have opted to be part of my gear and setup for the race and fell asleep under the desert sky. Christened the Chipotle Burrito, here is a look at the luxury accomodations we procured for the night:


Flat total: Steve 1…Jill 0
Crash total: Steve 1.5…Jill 1  (extra points for impressive carnage given)
We finished out the section until we met up with the Old Spanish Trail. Nearing Saguaro National Park, the trail and scenery were amazing. We tore downhill, through narrow switchbacks and were surprised with some fun technical rocks. A minor run in with a branch and one more flat had the totals looking like this that afternoon:
Flat total: Steve 2…Jill 0
Crash total: Steve 2.75…Jill 1 (Huge, multicolored bruise garners extra points as well)
Leaving Tucson in the sunset, we started north that evening and camped in Show Low, AZ. Hungry and anxious to finally try our hand at gourmet campfire cookery, we pulled into a roadside camping spot. We soon discovered we had the entire area completely to ourselves. The weather was perfect again and the breeze was barely noticeable. A bottle of Crown found its way onto the tailgate as we started a huge fire, cut up veggies and chicken and cooked them in the fire pit. 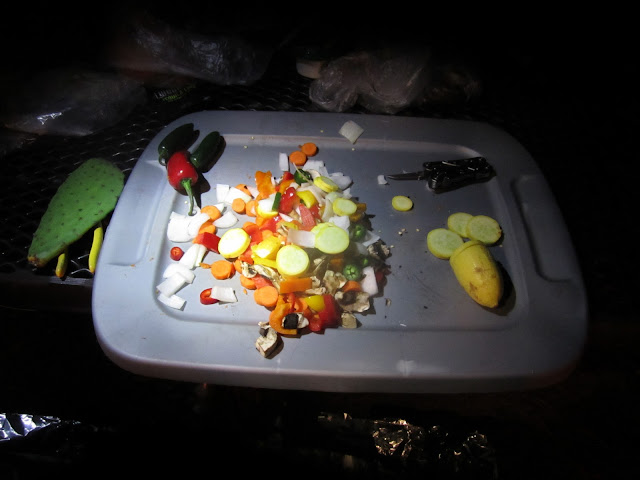 ﻿
The Crown level dwindled slowly, the music may or may not have gotten louder and we had our first experience with a campfire-cooked cactus leaf. 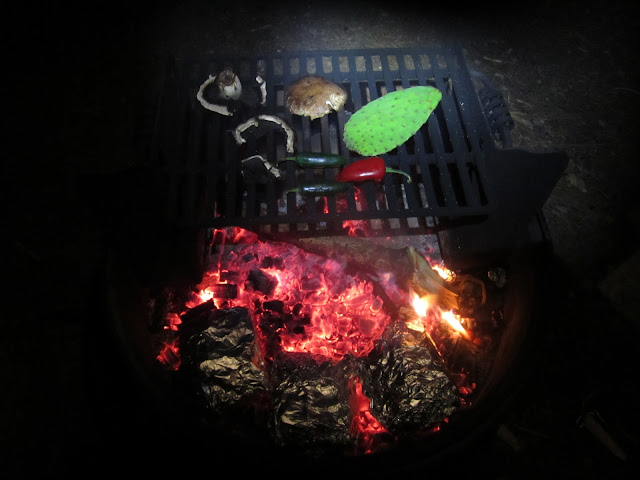 Verdict on the cactus leaf: ehh, not so great. Lacking flavor.
The chicken and every-kind-of-vegetable-imaginable dinner was fantastic. We crashed out and woke up the next morning to continue on the long drive to the San Juans. Red Box DVDs helped the miles pass quickly and we stopped at the Four Corners National Monument. Everyone stands in the four states at the same time, but who pedals across four states simultaneously? 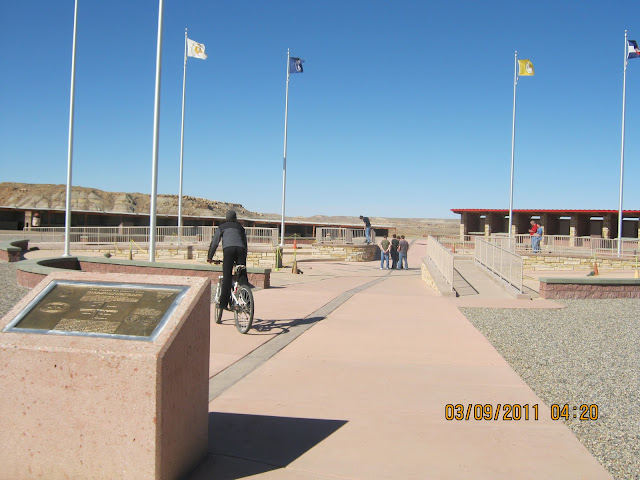 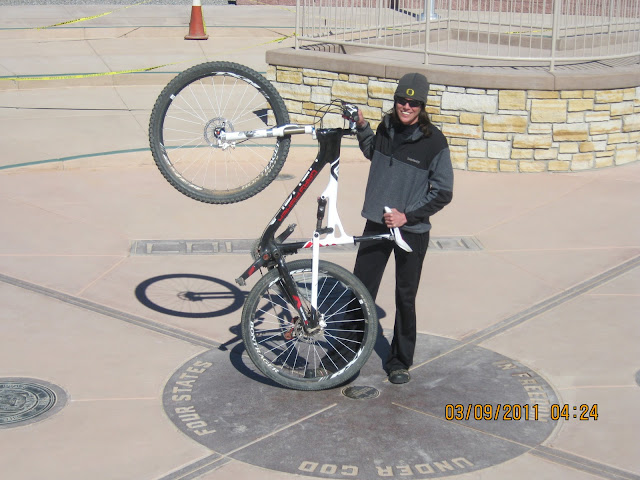 More pictures from just south of the Four Corners area: 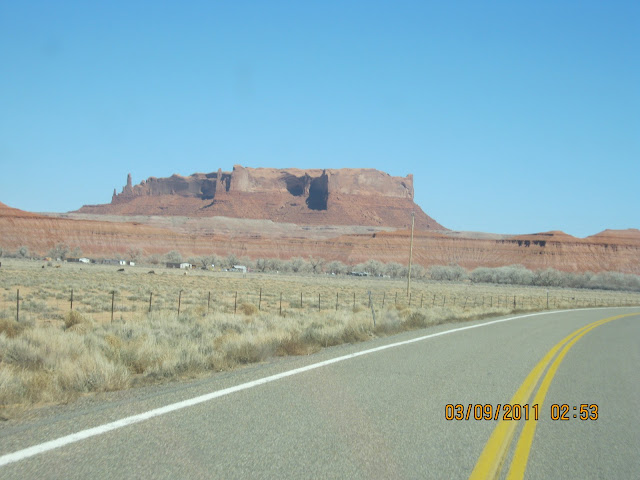 The scenery drastically changed as we continued north into Colorado:

Questionable avalanche conditions and time (ugh!) unfortunately prevented the epic trip planned into Chicago Basin, but the alternative route we chose was nothing short of gorgeous and inspiring. Lunch reservations at 10K’ proved to be amazing as expected: 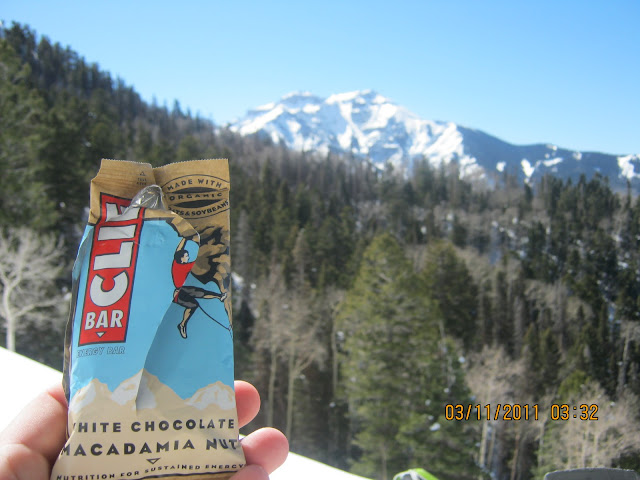 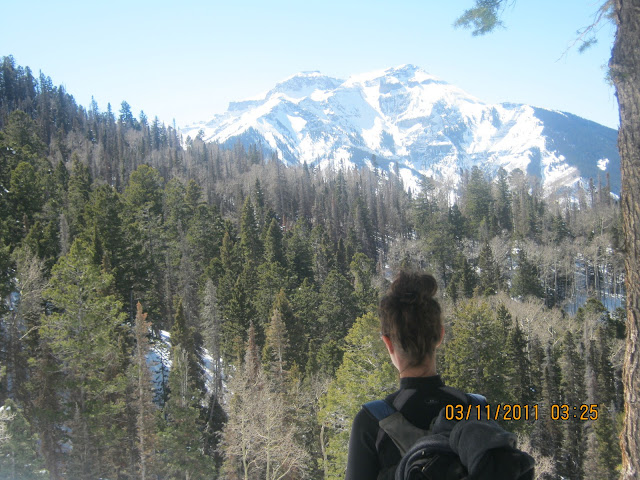 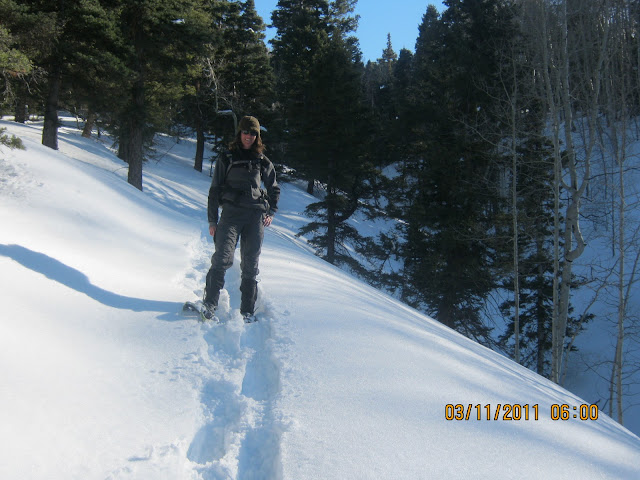 Telluride was the previous day’s destination. I could go on for pages and pages about the perfect beauty of this sleepy little town (song lyrics borrowed a little J). Bikes were the choice mode of transportation and we even took them up the gondola and rode around amongst the snowboarders and skiers. 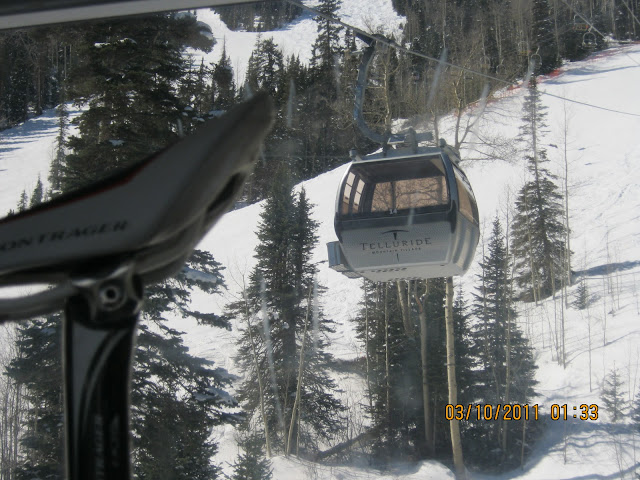 A few strange looks came our way and we seriously considered bombing down Telluride Trail (a blue run) in the snow, but being in street clothes and lacking any helmets or gear, we decided to leave the crash total numbers unchanged and hit the gondola for a ride back down. 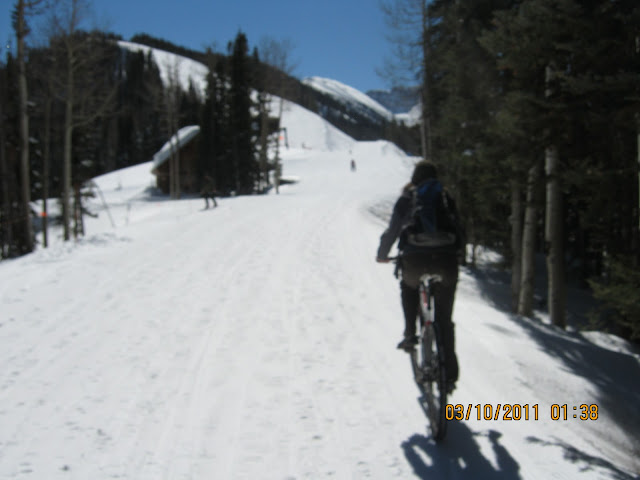 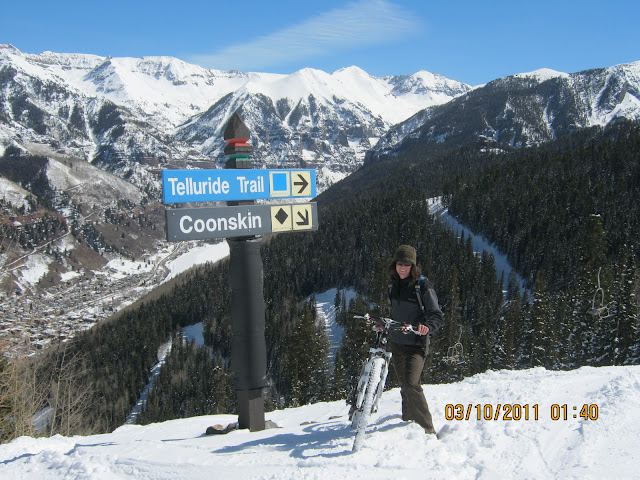 Finishing out the day in Telluride: 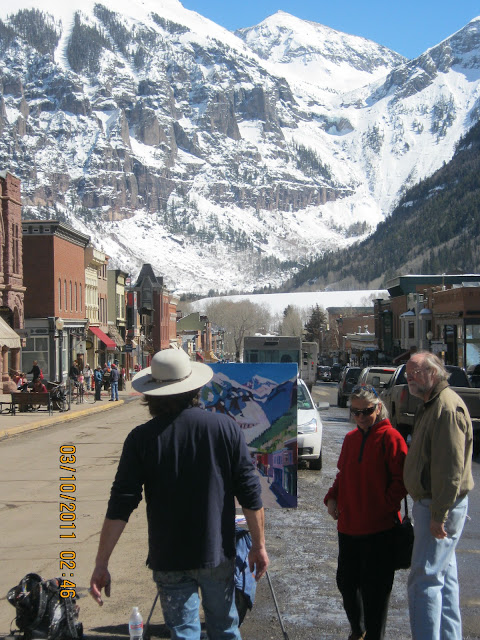 We then returned to Ouray and soaked tired legs in Orvis Hot Springs.
Leaving my favorite corner of the planet was the low point of the trip, but it was time to grind slowly back to reality. We made our way to Fruita, camped in the open space and rode Kessler’s up to Zippity Doo Da. Two thirty-something 10-year olds played in the Colorado sun for a couple hours on that warm Friday morning. Steve absolutely owned some crazy downhills and I managed the nerve to get one of the three big ones conquered. Take-home message: If you bike, RIDE THIS TRAIL! 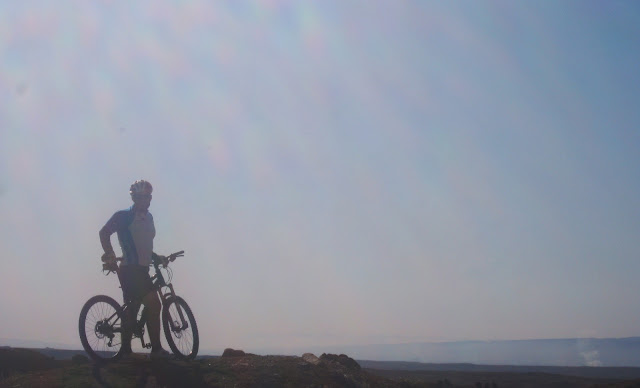 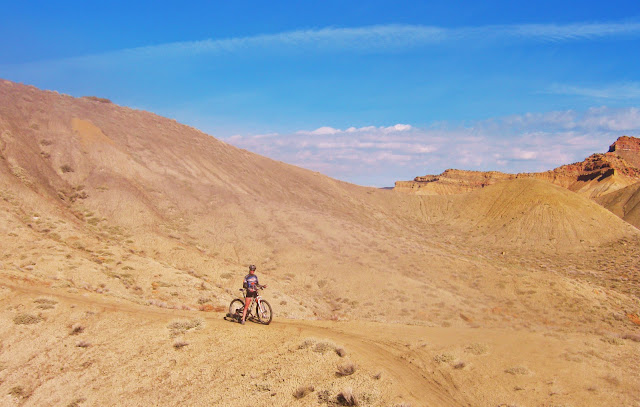 Time (double ugh!) was again a factor and soon we were headed east to Denver to the conclusion of an EPIC journey.
Using words such as incredible, amazing or stunning doesn’t capture the million perfect and priceless moments from this trip and all those from the hundreds of adventures prior. My eyes and my carefree heart lived, dreamed, inhaled and became part of the simplest things, such as:
Watching the moon start as a sliver in the sky and every night watching it change before my eyes.
Each new color in the sky and in the dirt below my tires.
The wrinkles on the face and tears in the dress of the old Indian woman in front of the decrepit post office in northern Arizona.
The sound of each red-hot ember as it exploded from the camp fire outside Patagonia.
The deer tracks along the snowy slope.
Drinking sweet, crisp mountain air into my lungs.
The refreshing taste of the cold snow on my lips in the hot sun.
The warmth of a down jacket inside a frost covered sleeping bag.
My cold toes tingling as I stepped into the hot springs and the fading away of time.
The stinging burn of the red jalapeno pepper on my tongue and my resulting dance around the fire.
The true freedom I felt every second.
Being fully appreciative of the present.
Tasting, touching, smelling authenticity.


Being aware, alert and active rather than just slipping into the grind of everyday and going through the motions to get by defines who I am. This is my life. I get one trip around and I will intensely pursue my passions, love, laugh, be silly, live freely and find meaning in what I experience.
I will always cherish the simplicity, the minimalism and the minute details of this trip as much as the big miles, the climbing and the elevation. In these ten days, my search for EPIC was satisfied mostly by the simple, perfect beauty of everything around me, from desert cholla to mountain crevasses...