The idea came to me in late July. I wanted to ride 24 hours of Moab. I hit up the website and it sounded like a blast. Hmmmm, I wonder if I could actually get anyone I rode with to commit and do it.? In case you are wondering what the hell I am talking about, 24 hours of Moab is an endurance race for mountain bikers that lasts (you guessed it) for 24 hours. At "high noon" on Saturday the riders rack their bikes next to a huge white tent, line up, run around a tree about 1/4 mile away and back to their bikes where they start the beginning of a 14.9 mile loop. There are many different options on how to compete: one can race solo (yep, that's right, pedal for a day straight); or one can race as a team of two, four or five (and maybe more).

If you are wondering more about it:   grannygear.com

I was happy to find three guys, Chris, Drew and Zack who wanted to do it. After a considerable email train finding the perfect name, we decided on "Need More Cowbell."

I have to admit that I thoroughly enjoy the 13 year-old humor that pervades all of our rides prior to and since Moab. These guys always keep me in stitches and I love the fast pace and challenging obstacles they push through.

We got into Moab on Friday and began to set up our camp. The race is held just south of the town of Moab in an area called "Behind the Rocks." This area becomes tent city for the weekend. 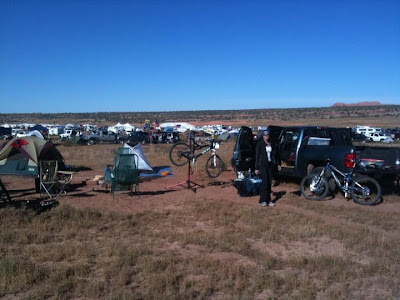 We pre-rode the course Friday afternoon, built a fire, ate and headed to bed, eagerly anticipating the next day. I was elected to ride the first lap (only because no one had ANY desire to run) which meant I had to be a part of the Lemans style start (think run around tree, jump on bike).

Here I am in the middle of the chaos that was about to ensue...notice the elbow pads that came in handy as I was rounding the tree between two huge dudes. Ugh....threw a little elbow in the ribs and I held my ground..kind of. It was more like a last ditch effort to stay on two feet.

My first lap was 1:30 I think. The first 3 miles were utter chaos. I took off at a quick pace, hoping to avoid all the bottlenecks I could foresee getting up the first part of the rocky climb. There were people spinning out, pushing their bikes, falling over and there was even kind of a line forming up a common line onto the top of one rock. I found the fastest guy I could, put my front wheel about 12 inches behind his back wheel and prayed he didn't stall out. I have no idea who he was, but he found some awesome lines through the mess of bikers and I stayed with him for a long time. He lost me on the flatter, fast sections as all my power was seeping into the ground due to a crappy rear shock and I couldn't begin to catch him. The next part was the infamous "nose dive." It definitely earns its name as I saw no one attempt to ride the steep rocky drop. (I watched some great Youtube videos of some colossal wrecks prior to the race, however).

The bottom of the nose dive is kind of a sandy flat spot and then you again pack your bike straight up some slick rock for another 20 or 30 ft. From there, I was able to ride up to what resembled a trail again. The rest of the loop was not too technical but had some fun rocks and hills to rail down.

My second lap was pretty close to my 1st lap and I remember watching a gorgeous sunset. I was feeling good, but frustrated as I just couldn't find the speed I needed on the long, flat roads. All the people I had passed on the hills, and the downhills were now passing me. Around mile 13, I fumbled for my hand held Motorola radio..."This is Mary Swanson to Lloyd Christmas...I am at mile 13." Yah, we all picked our radio names from "Dumb and Dumber" which is pretty much par for the course with Chris, Drew and Zack.

My third lap started great. My legs felt good and I was making good time until my head lamp started to dim about mile 7...GRRR!! It was fully charged and should have burned bright for the entire lap, but it was starting to really dim and I was having trouble seeing. I only had the helmet light and no light on my handlebars (which will NOT be the case in Tuscon). My pace slowed considerably. At mile 11 I had to stop for a second and grab my little Petzel hiking light that was a total joke. My "good" light had completely gone dead and I was using the light from other riders to negotiate my way through some thick sand. There is one line through the last 2 to 3 miles and if you don't stay on it, life becomes hell trying to slog through the sand.
My time was 20 minutes longer than my previous two laps and I was frustrated and feeling my legs from all the sand pedalling I had to grunt through.

Lap 4 was an awesome sunrise lap...WOW, the sun coming up over the LaSalle mountains in the east will forever be etched in my mind. I was a little slower on my final lap. I think it was due to not eating enough when I got up from sleeping. I felt a little hungry about half way through.

Our team was in the "Just For Fun" class because it was cheaper to register that way. And we had an awesome time. No one brought any sort of cookware, but Drew made the BEST homemade breakfast burritos that we warmed in a shovel over the campfire. Chris rode his heart out and finished a minute short of Zack being able to ride his fourth lap. A noble effort after him mentioning his legs were toast by then. Drew rode the quickest laps and I hand-delivered a beer which he dumped half over his head and shotgunned the rest.

Free mullet cuts, shots and PBRs were amongst the highlights on Sunday morning...I would venture to say, only in Moab, but I did grow up in John Day, OR.

This was my first race. I haven't even ridden a mountain bike for a year. I rode 60 miles during that race and had a lot of time to think. I loved every second of it. I could feel something starting in my soul, a passion for this that will haunt me, motivate me and drive me until I take my last breath. I thrive on a bike.

There were times my hands were freezing and could not feel my toes. There was the "thrill" of packing a 34 lb bike out of the nose-dive at 3AM. There was the frustration of trying to find the line through the god-awful sand when my headlamp quit. But, during that 60 miles, I came to this conclusion:   in exactly one year, I WILL be on a different bike, riding it solo.

I wish I had some pics of us actually riding, but I haven't gotten them from the guys yet. Zack made a cool video of his first lap, added some sweet songs and made an indoor spin class out of it. We even had the cowbells and burritos afterwards. I am getting that from him as well and will post it to give you more of an idea of what the ride was like....In the meantime, here are some more pics of Team Need More Cowbell: