Some hit the bars with a mission to score a free shot at each. Some spend their birthday at the spa. And some choose to completely ignore the day and work. Yah, not me. My birthdays generally include a trail, a mountain and a journey. For example, my 25th saw me, two labs and a good friend skinny dipping in an icy waterfall after a death march through the Trinity Wilderness of Northern California. The big 3-0 was a well planned adventure through New Zealand (this one really deserves its own post) and just this past May, #31 was spent in Chicago Basin chasing summits that were once again calling.
Chicago Basin is located between Silverton and Durango, CO and is graced by peaks that bring tears to my eyes. The three on my brain this time were Windom, Sunlight and Eolus. It was Memorial Day weekend so I was a little leery of all the people the long weekend would bring, but I convinced my chosen partner in crime to bust out the crampons and we were off.
After some debate between the Purgatory trail, a 30 mile approach over Columbine Pass and the narrow gauge railroad that runs up the Animas River, we opted for the train (largely for the experience of a whistle-stop that would leave us in the middle of nowhere). From the middle of nowhere, we picked up a seven mile trail that meandered along the Animas River to the head of Chicago Basin.
﻿ ﻿
﻿ ﻿

We were in shorts as we packed all our gear to camp for three nights. The weather was warm and there was virtually no snow until we entered the basin. The hike in was gorgeous. The Animas roared below and we were surrounded by noble, snow-covered kings on both sides.
Early in the afternoon we arrived at the perfect camping spot, set up and hung our food. Not able to resist what was directly in front of us, we opted for an exploratory day hike before the sun went down. The spring snow was starting to melt, but it still was getting cold enough at night to make weird looking snow sculptures. 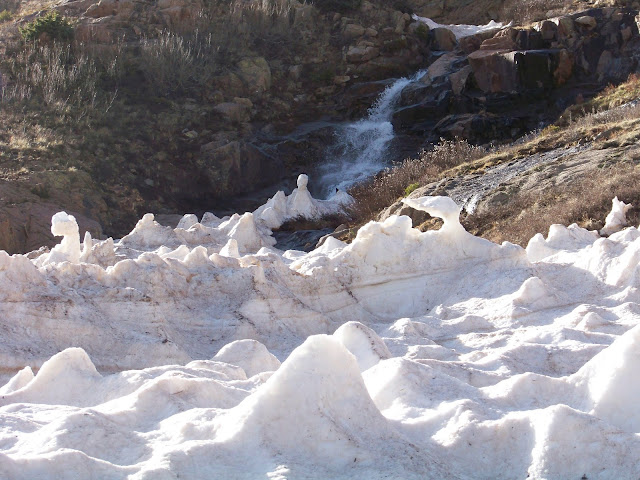 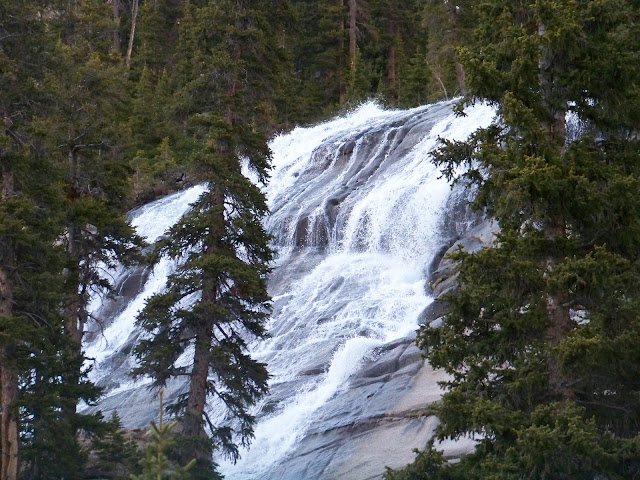 ﻿ ﻿
After climbing up some rocks to the top of a couple waterfalls, we returned to camp, anxious to get an early (3AM) start on Sunlight and Windom. Astonishingly enough, we only saw two others going into the basin. We met a couple hikers coming out, but I dozed off grinning at the solitude I was getting for my birthday.

﻿﻿ ﻿﻿
Well, almost… I awoke sometime shortly after midnight to three really loud dudes who had no doubt escaped their wives for the weekend, chose to camp about 100 ft away and celebrate their escape with a few bottles of whiskey. In line with my laid-back social nature, we decided to befriend the whiskey-toting hombres. Their plan of attack was identical to ours and we would end up sharing both summits the next morning.

﻿ ﻿
An early, chilly hike up to Twin Lakes from camp, gave me the first good view of Sunlight and Windom. With crampons and ice axes, we trudged up the long, snowy couloir to an absolutely exhilarating finish through icy, rock tunnels and up snow and ice-laden slabs of red rock. Each step sent adrenaline through my entire body. Time became still as I pulled myself up, through and around the route to the summit. Never before had I felt the strength in my arms and legs in such a poignant way…surreal, invigorating, enlivening. The route from the bottom at Twin Lakes was a long steady climb that steepened significantly right after the halfway point, but I never felt fatigued, winded or even noticed the physical demands. I was in a different realm completely focused on everything non-human around me.
The last jump to the very top of the summit block was too dangerous due to the ice and snow, so I kissed the gigantic slab and claimed my summit. We converged paths with the loud boys again and one guy actually did attempt the move and made it. Looking back, I probably could have made the leap, but my lack of confidence in my boots sticking to the slab and the GNARLY exposure that would have sent me to my end kept me from the final jump.
﻿ ﻿
﻿
﻿ ﻿
﻿
﻿ ﻿ ﻿Descending Sunlight was a fun glissade and my eyes fixated on the Widow Maker couloir which would deliver us at the top of Windom less than a quarter mile away. After a quick protein bar and some Propel in the basin between the two peaks, I was itching to begin the ascent. I started behind two of the guys but quickly found my groove and entered the same realm of exhilaration I felt on Sunlight just an hour before. I never stopped once I started my climb. I never felt tired and I was focused intently. It was steep and icy and each step required jamming the toe of my crampon into the mountain to make a “stairstep” of sorts for the guys behind me. The morning sun was warming everything and each breath I took filled my lungs with that light.
The top of the couloir brought me to an enormous and very unstable cornice. I had plenty of room to get around it and continue the short scramble to the true summit, but it was definitely a sight to respect. I spent 5 minutes alone waiting for everyone else, simply basking in the splendor of an unforgettable morning in the San Juans. At that moment, I realized I had been given more than I ever expected for my 31st birthday present.

Pictures, laughter, high-fives and some snacks kept us all on the summit for about 20 minutes. Our return trip included some high speed butt-slides (yes, a very technically correct term) and some rather annoying post-holing toward the bottom due to the mid-morning sun melt. We returned to camp just past 1 pm and caught up on some sleep and lounged around like lizards in the Colorado sunshine.
The next morning was REALLY cold. Eolus via the East Couloir was the goal for the day. We got a little later start, but soon caught up to our new friends. We climbed up to the summit of North Eolus and looked across at two of our cohorts who decided to tackle Eolus first. Simultaneous summits gave us the chance to wave across the basin below and the famous “catwalk” that joined the two peaks. The catwalk looks sketchy from above, but it is actually no more than a fun, easy Class 2 traverse to Eolus. After leaving the catwalk, we deemed the snow too dangerous and slick to continue on the route to the summit. Starting an hour later than the previous morning, proved to be a mistake as the sun had just began to melt the top layer of ice. The slope was too exposed and too dangerous to cross in the morning sun, so we did some epic butt-sliding back to camp, laughing and joking the whole way. I must say that I was disappointed at the time to have missed out on Eolus, but now I am rather glad. Why? Heh..because a return trip soon is inevitable.
﻿ ﻿
﻿ ﻿

We broke camp and stayed along the Animas that evening, did some day hiking and childlike exploring and then flagged the narrow gauge down the next morning to get back to Durango.

I have used nearly every adjective to describe this experience and, honestly, none can do justice to convey what I experienced on the anniversary of my 31st year…So I will leave you with this: THAT was one helluva a birthday bash. So much better than going to a bar trying to score free shots J
﻿ ﻿
﻿ ﻿
Posted by Ji!! at 8:26 AM