Come on, Jill!
What is wrong with you?
Get up and move!

My brain and body were at war. My system was completely rejecting any food or water and to stand completely upright and grasp my handlebars was only possible if I braced myself against the bike and then immediately dropped my head almost to my knees. To maintain my balance, stop the tingling and burning in my legs and arms and catch my breath, I repeated this little ritual over and over, stopping three and four times on the hills I was barely capable of summiting. The southern Arizona sun was getting higher in the sky and the morning was beginning to heat up. I responded by sweating then shivering.

Huh? Why am I shivering and shaking? Why does my body hate me right now?
Didn't you promise yourself in 2012 to never set rubber in the Canelo Hills again?

I drank water and immediately became nauseous. Racer after racer passed me. I struggled to find encouraging words and a smile amidst my fear of losing the contents of my guts along the trail in front of their tires. I finally stopped and laid out flat on my back and closed my eyes. My stomach continued to turn and I had goosebumps covering my arms and legs.

I laid here, completely still, for about 15 minutes: 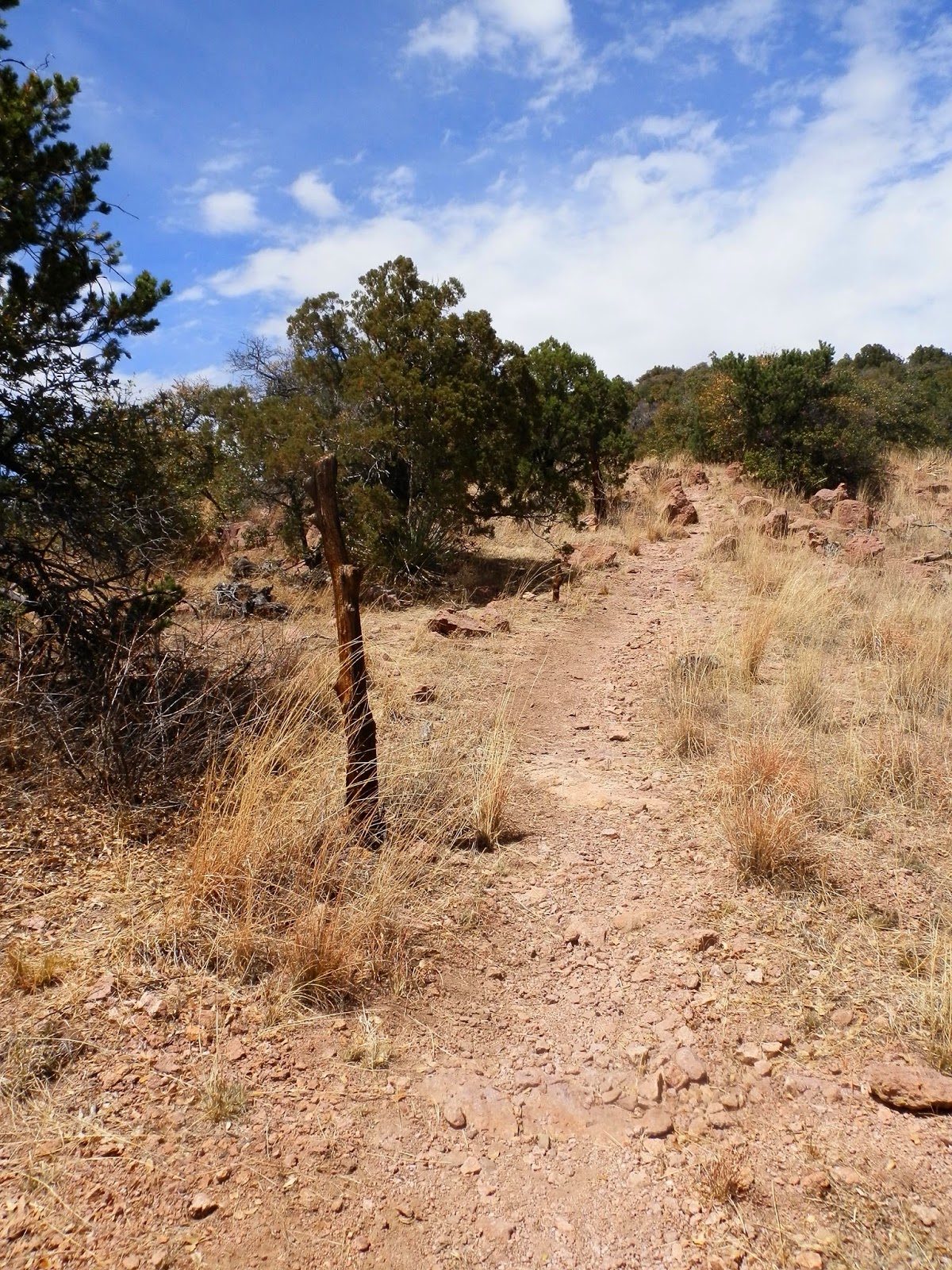 I am now at the back of the pack, behind everyone. Way behind. I have just watched everyone pedal away from me like I was standing still. I started out slow and barely put any effort into the 14 mile section from the border to Parker Canyon. I felt fine for about 30 minutes after that. Now I don't even know if I can make it to Patagonia. I want to just lie here and go to sleep and hope that when I wake up, my body is back on board with the plan and this is all a bad dream. I wonder if anyone has ever had to push the SOS button on their SPOT? I don't want to do that. I HAVE to push through this.

I pushed for a little while longer and finally got on and started riding. I crossed the road between East and West Canelo Hills and found a shade tree. I sat and thought long and hard about what bailing out down that road would do to me mentally. It would crush me to give up now. I would be throwing away my entire goal of the Triple Crown. My stomach turned and I lost what little water still remained.

I want to ride down that road into Patagonia and call this whole damn thing off.

I gave a quick look down the bailout road and put my helmet and gloves on, picked up my bike and continued on the trail. No way was my brain letting me quit. Not a chance. When I had to hit the SOS button is when I would quit. I slowly crept along, walking some, pedaling some and my brain and body continued to battle until I finally got to Cott Tank. I opened up the spigot, filled my empty Camelbak and soaked my head with the cold water. At this point, I was sweating rather than shivering, so it felt refreshing to have the water run over my head and my core temperature drop.

I found a soft patch of grass near the tank and just laid down for about a half an hour. I think I dozed in and out of dreamland because I remember dreaming of snowy mountains or something like that and I remember being vividly aware of my brain first nagging at, and then outright yelling at my body to get moving. Somewhere in the area between dream and reality, I saw myself getting up and starting to ride, but when I opened my eyes I found myself still looking at Cott Tank.

Get to Patagonia. You can make it that far. Get there, get in your bivvy and sleep. You can push through this. How bad do you want this? Bad enough to dig deep? This will eventually pass. How bad, Jill? How bad?

Finally, at 7:30pm, I rolled into Patagonia and just made it before the store closed. I bought a Gatorade and a cup of ice and made the attempt to drink. It was initially successful and I sat down by my bike in front of the store. I saw Mark Caminiti who basically had the same awful day I had. I got an offer to bivvy up in   a nice lady's backyard. My nausea seemed a bit better, but I was roasting in my skin. I crashed out and slept for a few hours.

My brain, in its characteristic battle with my body, was still urging me on, reminding me how far behind I was and pushing me to go to Sonoita. In response, I set my alarm for 1 am and reasoned that the 13 easy road miles into Sonoita would be better done in the cool temperatures and I would make an attempt at real food from the store in the morning. I struggled all the way to Sonoita. My stomach was queasy, I felt like I could vomit at anytime and I generally felt dizzy and shaky the entire way. I must have been still asleep or a little loopy, because first I made a circle or two around town, really having no idea which road was going to take me north.

Rolling into Sonoita, I found a grassy field behind the store and collapsed into my bivvy. Sunlight and the sound of the footsteps of a border patrol agent woke me.

"Just a mountain biker!" I smiled.

"Ah, no worries, just checking things out....hey, you ok? You look pretty pale. If you need anything we are just down the road."

I thought about what I really needed.

Um, a new body that worked would be great.

I gathered my stuff and pedaled around to the front of the store. I ate some fruit and a small nutrition bar and looked up to see Chrissy and Matt roll in. They had gotten a room the previous night and were having hell with the heat and a sinus infection. I also saw Aaron Denberg who mentioned his planned restart on Monday. I was shocked that I was anywhere close to anyone in the race and also at the fact Aaron was going to ride the Canelo Hills again. Later I realized how fast he is and that he was now blazing through the state giving the record a run. I soon understood his madness and was humbled by and in awe of his strength and determination after struggling so badly the prior day. Damn, Aaron, you are amazing.

I decided to follow Chrissy and Matt out towards Kentucky Camp, but didn't even make it to turn left at Santa Rita Road before losing my breakfast.

AAAAAAUUUURRRRGGHH!!!!! COME ON! This is supposed to go away. I need to ride. I want to ride. I hate not being in control of my guts.

I had a big decision to make. I either push on, completely dehydrated, hungry but not able to eat and weak or I stop, go down, rest and make rehydration and nutrition the focus of the next 12 hours. Not surprisingly, my brain chastised me for stopping and pushed me to go on nonstop to make up time, but something inside told me this was not that simple and I had best listen to my body for a change and take care of it or the SOS button was going to become a harsh reality.

So I assumed a prone position for the next 10 hours, flat on my face, unable to sleep and my monkey mind raced. It went back to the Tucson airport, meeting Aaron, Mike, Tom and Steve: 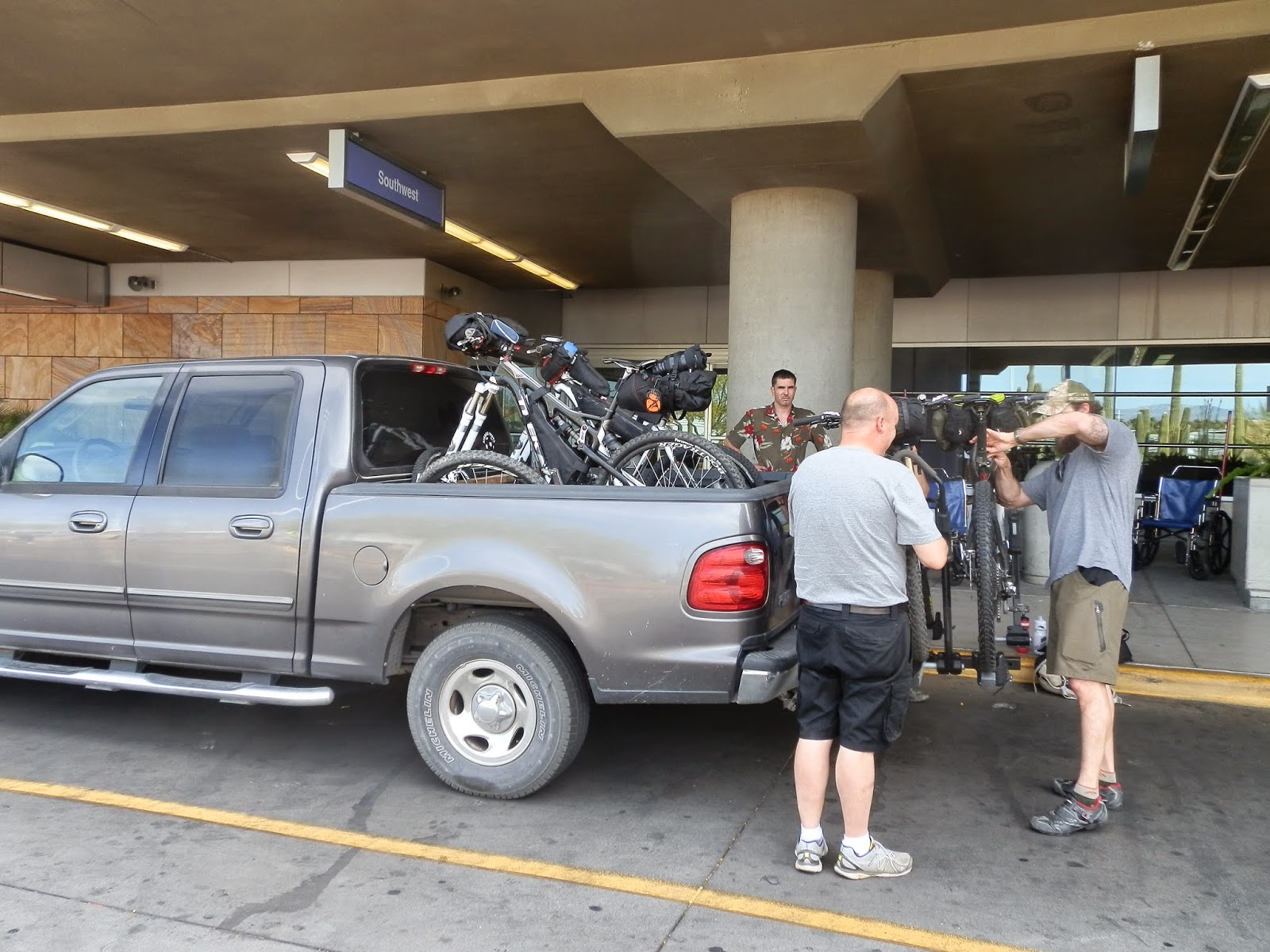 It went back to the post office and packing up my bike and mailing everything else home: 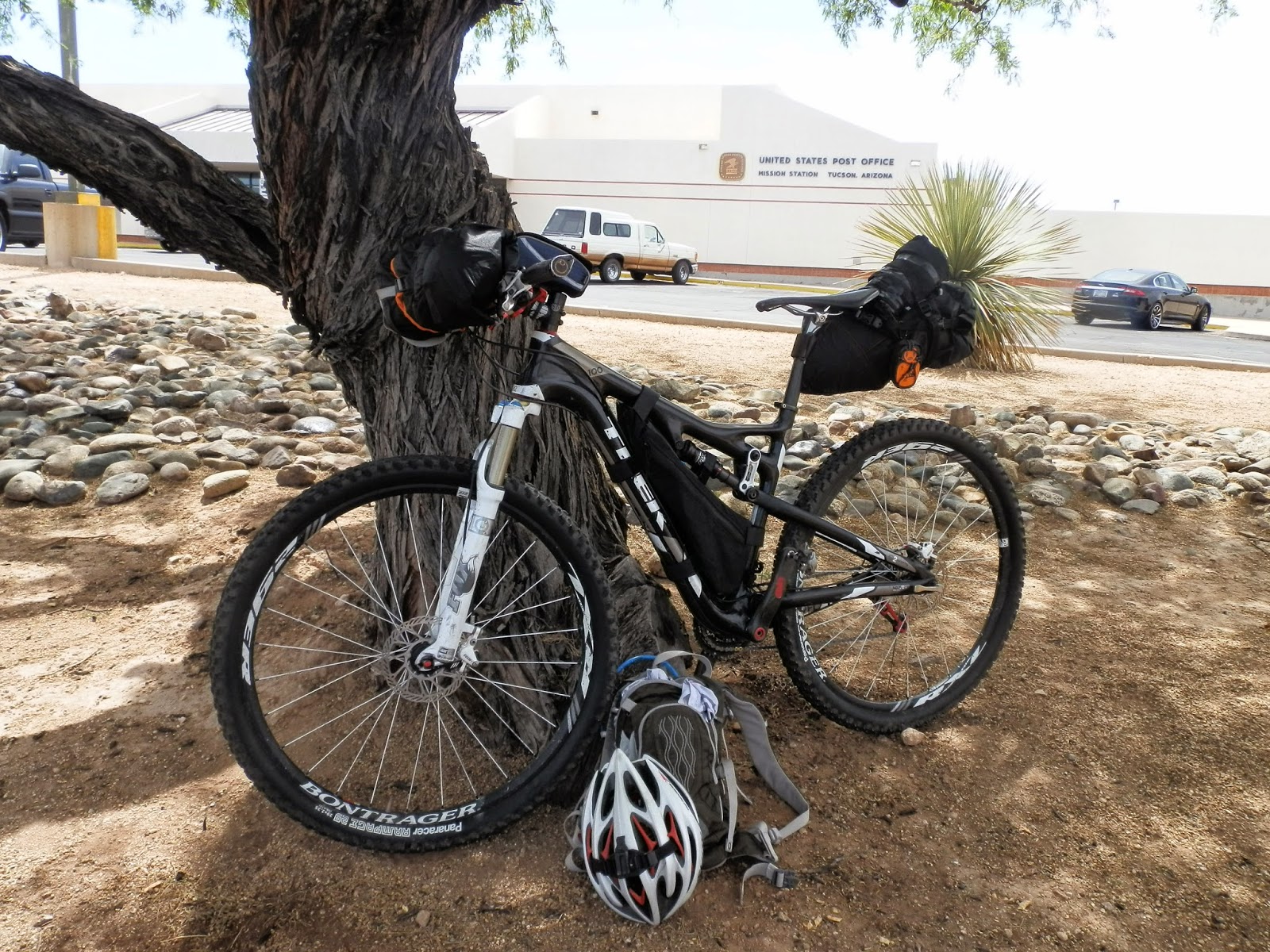 To what I had brought to eat because I was literally starving after the last 24 hours of hell: 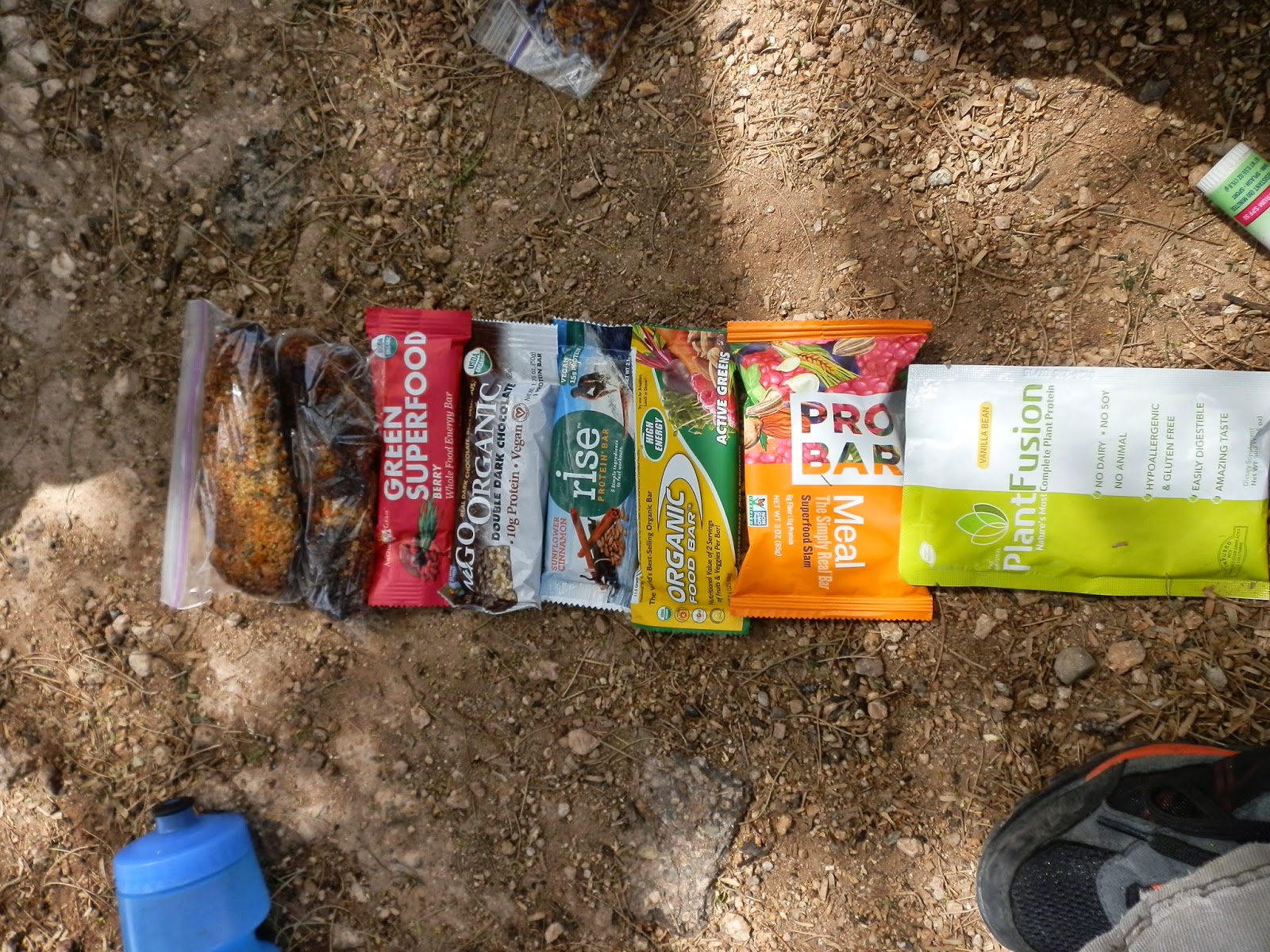 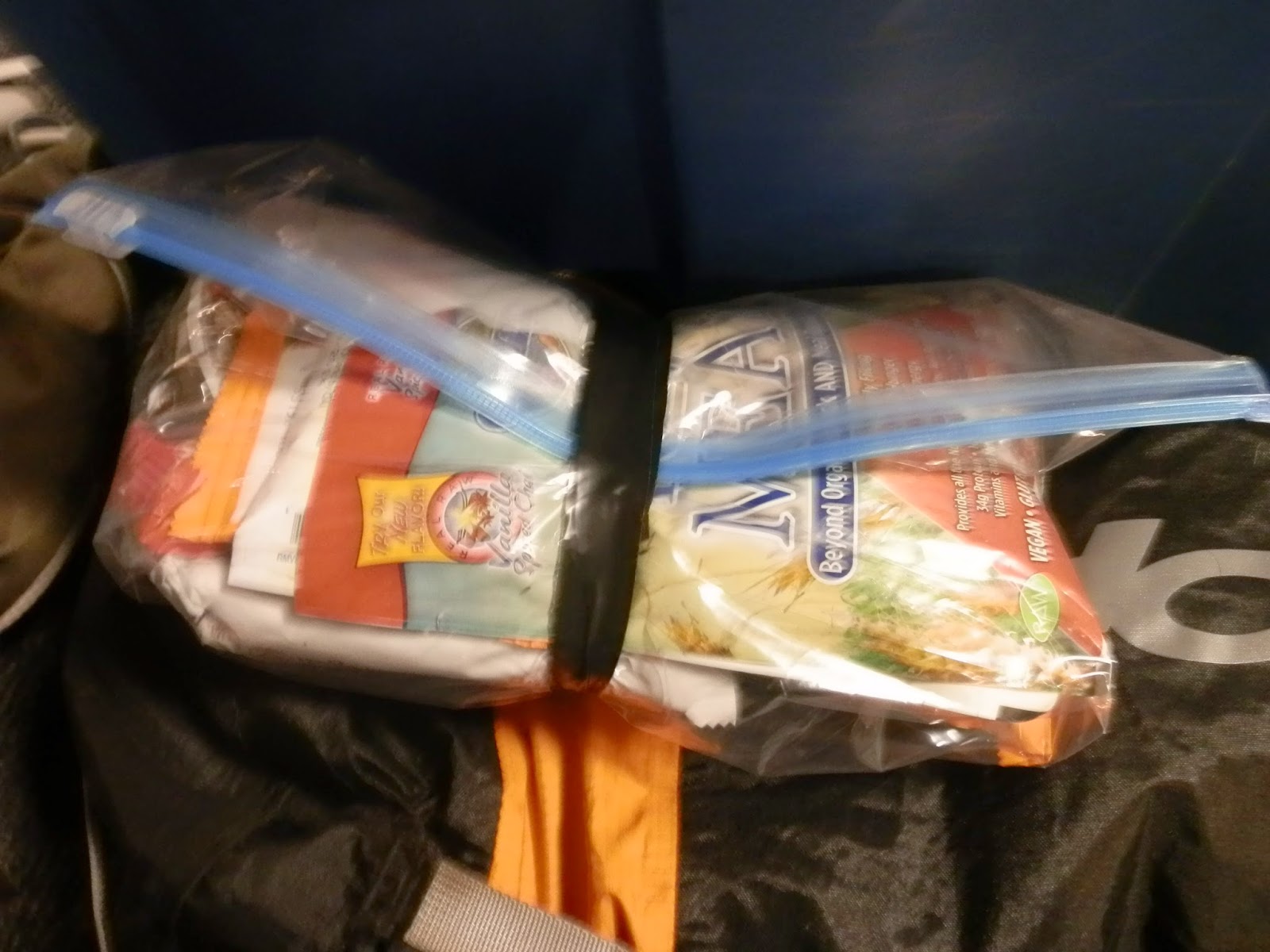 Then to the border a little over 24 hours ago:


Over the next period of long and seemingly endless hours, I oscillated from complete despair and loss of desire to ever ride another mile on a bike to hellbent determination that I would not let anything stand in my way of a finish. Back and forth, back and forth. I prayed to just sleep so my mind would stop. Quitting would be the most comfortable thing to do. I arranged a ride to Tucson the next day and even found an internet connection to reserve a rental car. I knew and decided that I hated every mile from Sonoita to Tucson and somewhere around hour three or four of lying flat on my face, I had myself convinced I was a complete joke and a total failure. I wanted nothing to do with bike racing and I was done. I would not even attempt the Tour Divide and here was yet another thing I was at which I was going to fail--my Triple Crown dream. Wow, the demons were swarming me. Kicking me, laughing at me.

Finally, I got my mind to stop or it was just so exhausted from running in circles, I fell asleep. Thank God, I did, because when I woke up at around 8pm that evening, I felt like a human being again. I ate a good dinner and soon knew that there was no way in hell I was going to use that rental car reservation. I was headed to Utah, starting in the morning. I fell asleep after getting everything ready for a pre-dawn departure and slept better than I had in months. The green tent in Sonoita was coming down and the pink JH dot was about ready to move.

I changed my perspective. It was now a "race" against myself. Finish at all costs. Come hell or highwater. A very wise Jedi sent me a message and one word stuck with me "reboot." That is what I decided to do. Reboot after a tough start. For the first time in a long time, I allowed (forgave) myself to (for being) be less than perfect, tossed the all-or-nothing demon out the window, grabbed my shovel and dug deeeeeeeeep into my heart and decided that I really did want to see the red hills of Utah again.

One day at a time. One mile at a time. No racing the clock to Tucson tomorrow, Jill.

I still felt weak and tired but not sick and nauseous. My plan was to go slow, look at the beauty around and ride. Ride to finish. Listen to my body a little more rather than my overly driven brain.

But first I had to ask myself something. I first asked it at Cott Tank and then again in the bathroom staring in the mirror right before I headed out of Sonoita:

How bad do you want it?

I already knew the answer deep down, I just had to get through a bunch of garbage to believe it again.


*Keep checking back for the rest of the adventure. True to form, this was not the only major challenge in the first part of the race. No way the ol' AZ Trail was going to let me just waltz right through without more struggles. I just felt that Day 1 warranted an entire post.