The last time I set foot on the South Kaibab trail was April 2012. I had an Osprey pack I paid $15 for off of Craigslist harnessed to my skinny carcass. Attached ever so craftily to said backpack was my trusty two-wheeled steed, disassembled and settled in for a 22 mile ride. For those who are, at this moment, scratching the old noggin and wrinkling your brow in wonderment as to what the hell I am talking about, click HERE.

I distinctly recall (enough to analyze in previously written blogs) being a bit overcome with fleeting twinges of fear as I slowly began to descend, handlebars hitting me in the hamstrings for the first few strides. Fear gave way to excitement and anticipation as usual, the handlebars found a new place to ride, and away I went, plunging into the Big Ditch for the first time in my life with a silly grin on my sunkissed face....

Fast forward now, if you will, to last Thursday (aka Thanksgiving here in the United States) and my two feet were in the exact location again. They were now sporting my magical, bright blue Brooks Cascadia running shoes instead of my old, beat-to-hell running shoes I had pulled out of a package addressed to myself that was waiting at the post office in Grand Canyon Village back in 2012. This time, my old nemesis, Fear, was nowhere to be seen. It was way too early in the morning for that lazy bastard to be up and he didn't make the long trip from Colorado this time anyway. My legs were fresh and my back supported only a tiny pack with food and very few other essentials I felt needed a ride to the north rim and back. To my left was Steve, fidgeting with his pack and peering over the rim into the darkness of the early morning. There we stood, ready to cross this canyon not once, but twice, before the sun set into the west.

My first step was actually a skip, and like a 5 year-old, so were the next three or four. Lights aglow, southbound we commenced toward the muddy Colorado River. Rocks, ruts and steps under our feet, we descended on into the darkness. Ooh Ahh Point came in no time, Skeleton Point, down, around, down, down, around. There was no real test of physical exertion in our descent, just keeping vertical at a medium rate of speed in the dark. My longest run ever, prior to the 42 that stretched out ahead of us, was 15 miles, so I was maybe a bit conservative in the beginning, but after about 1:20 we were standing in the middle of a huge suspension bridge listening to the Colorado roar below us.

Phantom Ranch was a mere stone's throw away and soon we were standing at the split of the Bright Angel and South Kaibab trails. I could feel the descent in my calves, but we were both pretty energized and feeling strong. A quick drink and we were off to Cottonwood campground. The sun had not yet peeked over the rim and we came up quickly on a guy packing some gear overhead.The usual "good mornings" "great day out heres" were politely exchanged and away we ran deeper into the canyon. The trail was flat and wide and wound through a slot canyon that sent both of our Garmins into a tailspin. Our hopes for accurate data were lost, but we would not realize this until a bit later as we compared mileage.

We closed in on Ribbon Falls junction and "the stupid" hill that took us far above the trail split and then directly back down just as daylight decided to make her appearance.


We made good time to Cottonwood Campground and were at the Caretaker's Cabin just before Roaring Springs in no time. Missing the obvious spigot, we turned on the hose at the cabin and I soaked my gloves which were sitting on the porch in the line of fire from the leaky faucet. Not overly happy because the temperature was still just cool enough for cold fingers, I made due as we began the 5.5 mile power hike to the north rim.

The trail through here was stunning. We actually made great time and even took a few minutes to stop and take some pictures.... 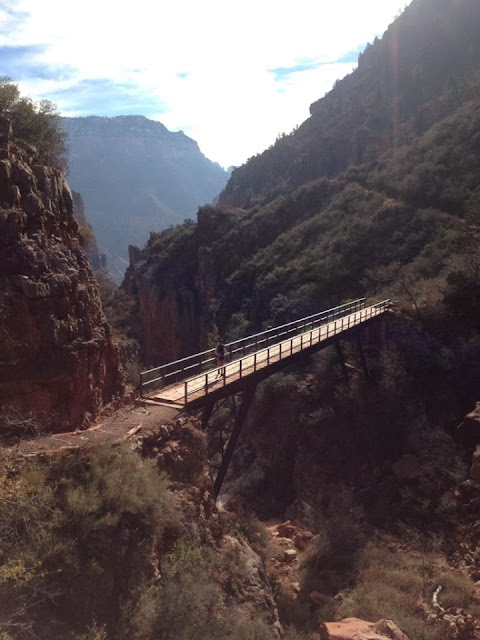 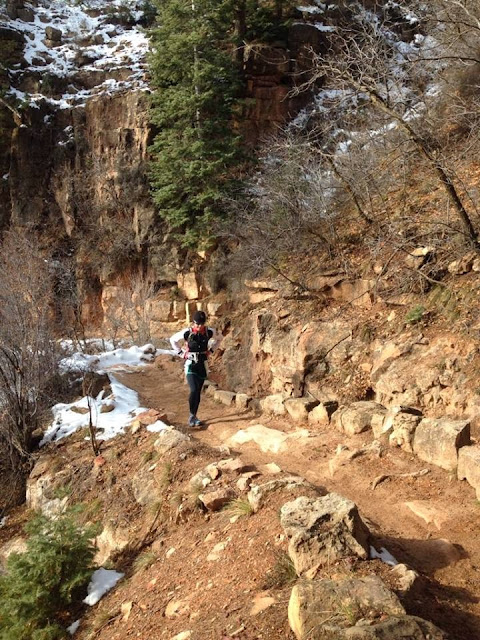 We spent probably ten minutes trying to eat food that did not look the least bit appealing and just enjoying the Arizona snow and sun at the same time. Both of us were chomping at the bit, ready to start descending. We were on pace to hit 12 hours, so we began slip-sliding down the ice and snow that covered the trail for the first half mile after the turn. We continued on and really before we realized it, were looking down at the Caretaker Cabin again. Nature called and I sent Steve on ahead, knowing he probably would appreciate a quicker pace, with the agreement to meet back at the obvious spigot to fill our water bottles at the bottom of the descent. As a baby trail-runner, descending quickly is still a challenge and the final mile to the bottom was a slight bit of hell. I felt slow and choppy and every step was jarring. It wasn't miserable but I was glad to run seven FLAT, fast miles back to Phantom Ranch. We were able to make up some time and as we neared the Colorado River again. 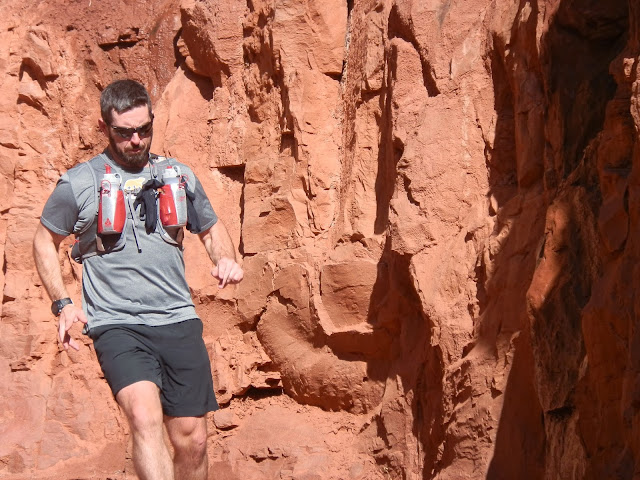 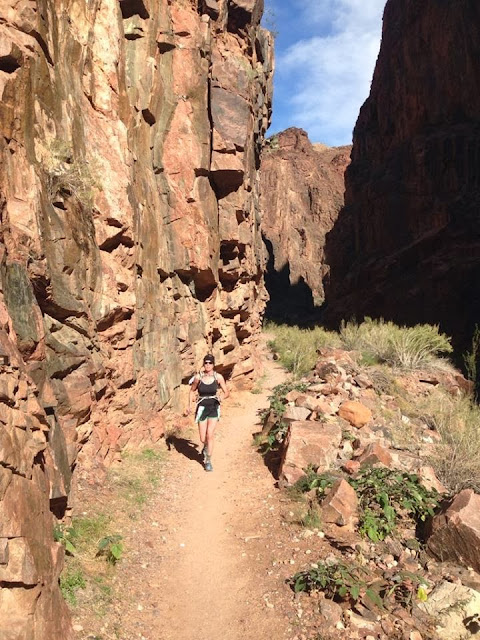 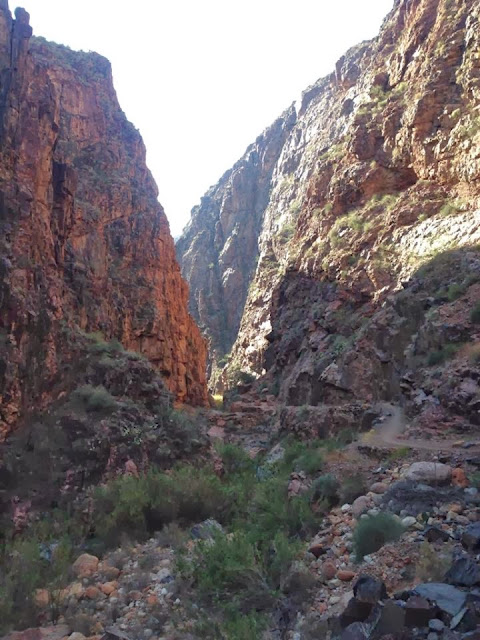 These miles put me into a trance. One I know and crave and love from the seat of a bike, but had only once felt while running...

Steve set a 10-11 minute pace, and I zoned in on his heels. I felt absolutely nothing. No pain, no fatigue, not even the rocks beneath my feet. My shoes seemingly hovered above the earth and I found myself touching that surreal, unexplainable euphoric realm for the second time ever while trail running. The first came while descending San Luis Peak earlier this fall. There, like here, I hovered above the trail. My thoughts were not thoughts but part of the air, the trail, the rocks, the moment. Time meant nothing. Logically, I knew it was passing, yet it seemed to stop and let us touch that untouchable feeling, be in that unfathomable moment. It was as though the fibers that held this moment together opened up and swallowed us for seven miles....

Hell, maybe it was just a glitch in the matrix, who knows? Whatever it was, it sure as hell spat me back out into reality at the steel suspension bridge and my calves began screaming obscenities at me.

Our original plan was to ascend Bright Angel trail which is 2 miles longer, but we knew we would not meet the 12 hour goal by going this way, so we made an on the fly decision to reascend South Kaibab and give 12 hours an honest try. 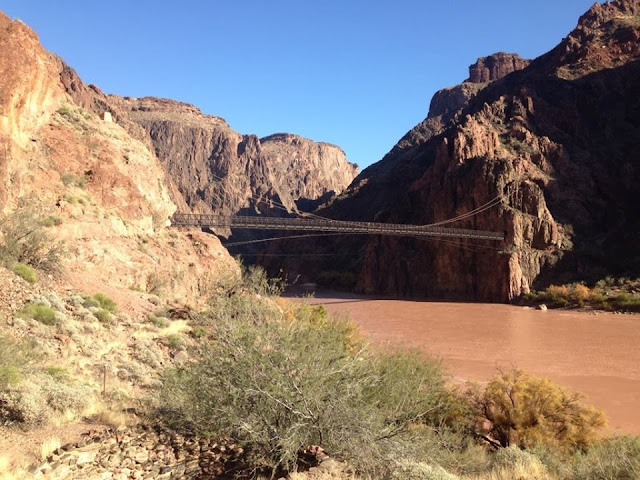 We crossed the suspension bridge for the second time at about 2:15pm and began the long power-hike back to the south rim.


We lost an hour ascending the last 6 miles. My legs just didn't work as quickly as my brain was commanding. Steve was a switchback or two ahead of me and I came around the corner to find him sitting here waiting for me:

Steve: 15 minutes and we are done

Me (muttering in delirium): No way! We won't be to the south rim for another 30 minutes...


Ten minutes later, (which Steve later told me is what he was thinking when he said 15) we were kissing the South Kaibab trailhead and neither of us had any memory of the pain of the last hour.

We crossed the BIGGEST DITCH in the world twice on Thanksgiving Day 2013. I held up 3 fingers to represent touching 3 rims in 13 hours!

A couple more pictures...just because: