Unlike last year's 24HITEF, I did not ride well in the Zuni mountains of New Mexico for this year's edition. I showed up tired and rode that way. I had no legs and was highly sleep deprived from 77 hours of work in the 7 days prior. I would love to say the previous sentence is a joke but sadly, its very accurate. Two jobs have been robbing far too much of my training and sleep time since mid-May. Money is a necessary tool in this little bike racing game I have chosen to play and I have a lot of catching back up to do after all my training for, traveling to and racing the Arizona Trail. One day of work in the entire month of April left me with not much more than a 20-spot in my pocket upon returning to Durango. Hence the ultra-marathon work schedule...


So I really shouldn't have been surprised when I just didn't feel like myself at all on the Saturday morning before the start. I felt a bit demotivated due to lack of sleep and every movement felt like a giant effort. Yet I expected to hop on the bike and pedal my my way to a top podium spot. Too bad it doesn't work that way....


Thus,  here is my account of a lackluster 3rd place coed duo finish:


Les, Kevin and I rolled into Gallup at 2AM on Saturday morning due to all of our work schedules preventing a Friday arrival. We checked in when the sun came up, unloaded bikes and gear and set up camp next to Tim Lutz,  (Les's current) and my former Trek teammate.


I ignored my exhaustion as I was waiting for the race start and Les to complete the first lap of our coed duo effort....


I was excited for 24 hours of hard racing against two very competitive coed duo teams--Karen and Allen Rischel of Stan's No Tubes and Nick and Tracy Thelen from Ascent Cycling--but I harbored a great deal of uncertainty and self-doubt stemming from 1) my exhaustion and 2) the way I felt on my bike--sluggish and weak. Not just physically, but mentally as well.


Simpy put: my internal fire wasn't burning hot because I had given it no fuel to burn. A fire without fuel just sputters and smokes. And looking at my lap times, that's all I did for 24 hours---sputter and smoke. I was trying to fan the flames with an outer appearance of pseudo-excitement that I had talked myself into and truly believed. I was genuinely happy to be racing and excited at the level of competition, but all the while there was a nagging voice in my head telling me to stop bullshitting myself--I was tired, underprepared for this race and weak on my bike. I felt like a joke beneath my kit and helmet. My inner confidence was in the toilet.


Ugh. And all this before I even rode my first lap.


Les came in strong off his first lap and I took off out of our camp up the double track that lead to the beginning of the singletrack course. We were in fourth place when I left for my first lap. Our neighbors were a husband/wife team and she left a good ten minutes ahead of me. I was able to catch and pass her at about mile 5, but it was much harder work than it should have been. I fought all kinds of self-doubting demons on lap 1. And 2 and 3 and 4 and so on. Nothing felt right. The familiar leg burn refused to subside like it normally does. I began comparing this year to last. I fought the "What the F am I doing out here, I will never be any good" demons and I ran through the entire spectrum of emotions from frustration to elation (yes, the riding during mile 11-14 will temporarily bring any racer out of any low).


Lap 2 was even worse. My legs quit and I felt like I could crawl on my hands and knees faster than I was riding. A guy from the second place male duo team sucked my wheel for about 6 or 7 miles and was actually quite the entertaining conversationalist, so it made the SUCK go by faster. He passed me on the downhill and assured me my pace was impressive. Um, yeah right....


The last mile of Lap 2 felt like an eternity and I rolled into camp with minor cramping and major fatigue. And this was only Lap 2? Sweet Jesus, it was going to be a long race.


Les took off on his third lap with a vengeance and I just sprawled out on the mattress in the back of the truck and didn't move for a good 20 minutes.  After an immature and emotional self-flogging session, I managed to eat some food, take off my shoes, helmet and jersey and just sat in the chair staring blankly into the trees. Les came in with his usual smile and said he would be happy to ride another lap after I asked him.


Wow. I think I may have hit my all time mental low in mountain bike racing at that moment. I really just asked someone to ride a lap for me? I laid back on the mattress again as he took off and knew I had about an hour and a half to stop beating myself up, crush the demons of self-doubt and fatigue, HTFU a bunch,,,,but mostly just ride my bike!!


I put 2600 lumens on my helmet and handlebars (Thanks, Trek Store boys!!!!) and was ready as Les came in. I stuck my ipod in my ears and got lost in music and singletrack. I owed Les 32 miles (2 laps), the coolness of the night was approaching and I found a touch of renewed energy and motivation.


We continued to ride double laps throughout the night and I felt better in the saddle but not great by any means. Just as the sun was starting to come up on Sunday morning, I was puttering along about mile 8 when I saw a flash of light and knew there was a racer behind me who wanted to pass. I veered off the trail slightly to the right and was overtaken by a red NoTubes kit.


I grabbed a couple of gears, awoke from my slow trance of pedaling and stayed on her up the climbs and down the small hills. Figuring I was probably getting quite annoying on her wheel for the last couple miles, I passed her about a mile or so before the big downhill. She stayed right on me  and I couldn't help but chuckle at the scenario that was unfolding for the second year in a row. We tore downhill and I could hear her behind me for most of the way. I led all the way to mile 14 which dumped us out on about 1/8 of a mile of gravel two track. I couldn't hear her behind me so I slowed way up and she went around. I kind of wanted to see what she had left, so I jumped on her back wheel and let her pull me for about a mile. Surprisingly, it was hardly an effort to stay on her and I almost bumped her tire a couple times. A fast guy came up and went around both of us and I saw my opportunity to go, so I passed her and took off. The next time I saw her, she passed our camp after I had been done for about 5-7 minutes.


The scene was a bit different from last year, but read this excerpt from my 2011 24HITEF race report:


"I was able to catch two of the women to put us into second after my first lap. We steadily gained time over the team in third place and chased the Stan’s No Tubes team all night long. I remember hoping that each person I came up upon in the dark was wearing the white No Tubes jersey, because we were so close. On my 5th or 6th lap at about mile 10, I finally saw Karen. She had about 7 or 8 minutes on me at the beginning of the lap, but was on her second lap in a row. I stood in camp, watching her head out, waiting for Erick to finish his lap and I knew this would be my only chance to take the lead. Once I finally caught her, it was a race. One of those moments I crave. And, one of those moments in which I grew as a cyclist. It was dark and we were on the loose, rocky downhill. Just ride, Jill, don’t think, don’t analyze, get off the brakes, lean back, push the comfort edge, come fully alive, stay with the bike….GO!
We both missed a weird turn in the dark and were seconds apart for a couple miles. I found another gear or two and managed to pull away in the last three miles and finish a couple minutes ahead, but was very impressed with her strength after pulling double laps."


It a nutshell, it was basically a repeat of last year. Racing head to head with someone I really respect served as the highpoint in an otherwise unimpressive race for me. I found my fire again for a while and was able to fuel it on demand. It temporarily gave me some confidence back--genuine confidence and faith in myself that I couldn't seem to muster up at any point prior in the race.

We ended up 3rd as mentioned earlier: 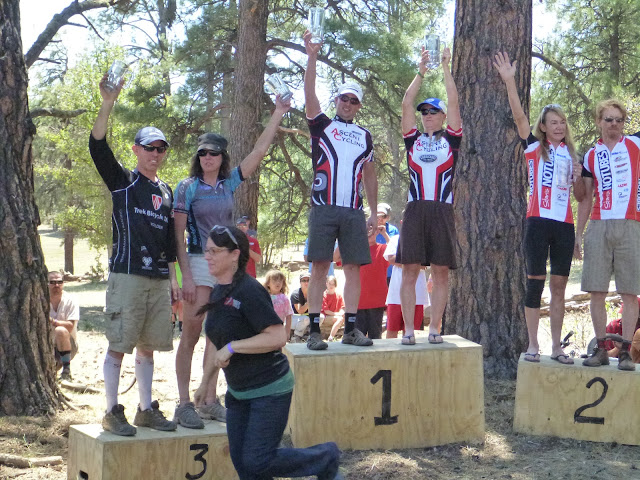 But the look on my face sums up how I felt the whole time: 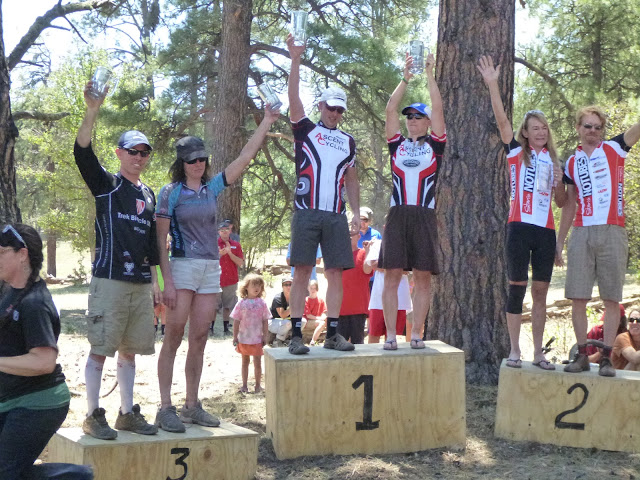 I felt like an alien on the podium just like I had on my bike during the race. Les was an absolute rock throughout, however. The fact that his years of racing experience equal the number of years I have been alive showed in his race. He was consistent, positive, encouraging and fun no matter what happened. He always rolled in with a smile and helpful words. One helluva person, racer and partner you are, Les Handy! Thank you for everything.


I also have a deep respect for Karen Rischel.. She has always been very encouraging and positive and eager to talk to a nobody like myself. There is no smug arrogance or standoffishness in her. She is a very friendly, kind and real person that I looking forward to racing with next season. I feel I can learn a great deal from her and thrive with those of similar ambitions.


Believe despite the fatigue and pain.Despite the work schedule. Despite any stupid excuse.


Believe in who you are and what you are doing.


I let the worms of self-doubt permeate my thoughts and began to question myself  on nearly every mile. My mental toughness was all jacked up, my physical performance was embarrassing and I really didn't have that much fun on my bike.


Everyone from the newbies to the washed up has-beens of this sport know exactly what I am saying. Why? Because were are all human. In one form or another we all have struggled with this in our own way. If you cannot relate, then I maintain you are a robot being programmed from a remote location.


Sef-doubt was completely absent (not joking one bit) on the AZT 750 because I chose at every tough moment to just believe, dammit. But, for some reason, I chose to let it come with me to 24 HITEF this year.


In some very tricky, wormlike ways.....