My first 6 or 7 days back in Durango after finishing the 750 consisted of commuting, working, sleeping, eating and Guitar Hero. Nothing really felt specifically sore but I could feel some deep fatigue in my legs as the Pugsley motor just sputtered up Florida Road for about a week. I even got treated to crab legs, ribs, BBQ chicken and Crown Royal the next night after I got home. There was a bit of a Wild West Theme to the shindig and true to form in Durango, it was a ton of fun:

Before I left for AZ, I entered 12 Hours in the Wild Wild West with the notion of going to a "for fun" race to see some new trail, kick back and just ride without being in ubercompetitive mode. Not really a race that was in my plans for 2012, but, hell, what better way to recover from my little jaunt through Arizona than race a coed duo in Ft. Stanton, NM? (insert a hint of self-taunting sarcasm). I really had no idea what my body was going to feel like or how my legs would respond to a request for some power. Les, my duo partner, even mentioned the possibility of him riding more laps if necessary. Being me, I secretly hoped that this wouldn't have to be the case, but I knew that expecting a good performance wasn't a smart idea since I was going to be in completely foreign "recovery" territory.

The week before 12WWW I did lighter workouts but put in one hard effort on the road and felt a lot better than I anticipated. My HR hit 194, I didn't feel unusually tired, nothing hurt or burned and even though I didn't feel like I could crush the world, I was slightly impressed with the physical side of my effort.

Mentally, however, it was a struggle. I have learned that the Monday (or first day) after a race is always really tough for me. It is always the "back to reality" day where a pile of laundry, a full work schedule and a big chore list taunts me. And it is a letdown from the intensity, the focus, the excitement and fun of racing my bike. I always feel reclusive, very analytical of things, a bit oversensitive and generally down.

I felt this "day after" syndrome on and off for about 4-5 days after returning home from AZ and the euphoria of the finish wore off. Some days I was normal and felt good, and other days--down and demotivated. I decided not to fight the down days like I normally would by putting in a super hard workout, but instead just accepted them as what was and rolled with it (off the bike).

Maybe this helped with the prerace jitters I always (and probably always will) get, because when Friday morning came my stomach was, amazingly, NOT in nervous knots as I waited for my ride to show up. I calmly loaded my bike and gear and four (unopened) cans of Ska beer and a 20-spot for gas later I was New Mexico-bound in a 1985 Westfalia Van with a fellow mountain biker. I then met up with Les in Albuquerque and we made if to The Bike Shop in Ft. Stanton to pick up race plates and even had time to check out the $5 pasta dinner for the racers.

It rained buckets from ABQ south and we got to a muddy campground which was the site of the race start around 9:30. I was asleep before my head hit the pillow.

Morning came and the race start was delayed an hour due to muddy trails. Some singletrack was also rerouted onto a double track climb, but distance and elevation gain we said to have remained the same.

And as I was getting ready and lubing my chain, my normal nerves arrived.Wait a minute. I was not lining up (one of the most nerve-wracking things of all for me) and riding the first lap and we were down here just having fun...right?

SO WHAT THE HELL WAS UP WITH THE NERVOUSNESS?

I could attribute it to my inexperience and immaturity as a racer but when I looked over at Les who laughed and professed his nerves as well, I knew it had much more to do with the very reason we strap silly numbers on our handle bars and line up to race in the mud, rain, snow, sleet and hail. Its the drive to win,  the thrill of competing and the need to push our limits that allow us to thrive. The bike is the vehicle (no pun intended) of expression for these innate attributes. A large part of "fun" is the fulfillment of the very need to compete whether we openly admit it or not.They are far from being separate entities.Hence, I will be the little old lady still strapping silly numbers on my handlebars and registering my SPOT tracker.

More of my extensive thoughts on this in future writing for sure...but for now I best make an effort to stick to the race report....

Les finished his first lap with a fair amount of mud on his bike, but I was really lucky because in the 50 minutes since the start of the race, the trail had dried out even more and I only had to negotiate two or three slick, muddy spots on my first lap.By the time Les was finished with his second lap, the course was stupid fast.

When I saw this:


I knew the course was primo. It was a good amount of climbing in the first couple miles was followed by some hard-packed flats and descents. This put us at the bottom of a steeper, long double-track climb followed by a rippin' descent down more double-track. Two more steep, but very short hills and it was PLAYTIME all the way to the exchange tent. Yeah, like 25-30 mph playtime (according to the Garmin) on hardpacked, twisty, FAST singletrack.

God, that course was pure GO! Seriously. I kinda feel bad for those who brought a singlespeed because after the climbing, it was a lot of big ring euphoria with some tight, techy switchbacks to keep us honest.

Les turned in the 4th fastest lap of the race and I pulled out the fastest women's lap. We shot six-shooter cap guns on the exchange, we left notes in chalk on the camp chairs and every lap seemed to get faster (and most did!)... 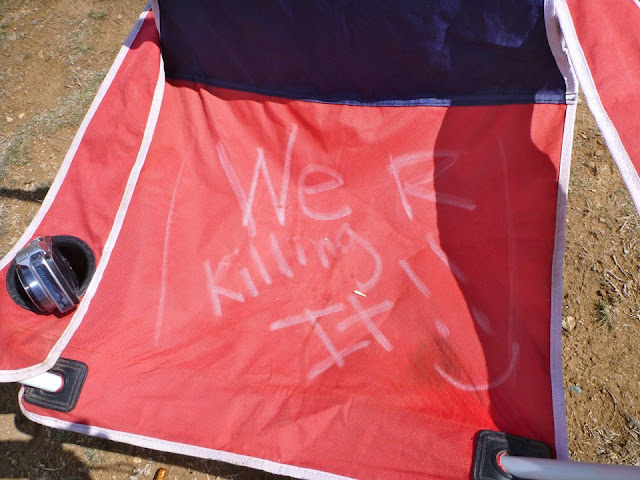 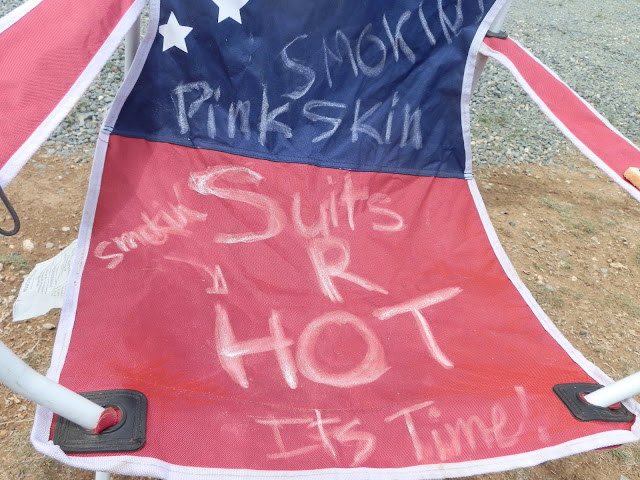 The infamous pink skin suit and Pippi Longstocking socks even came out for the victory lap: 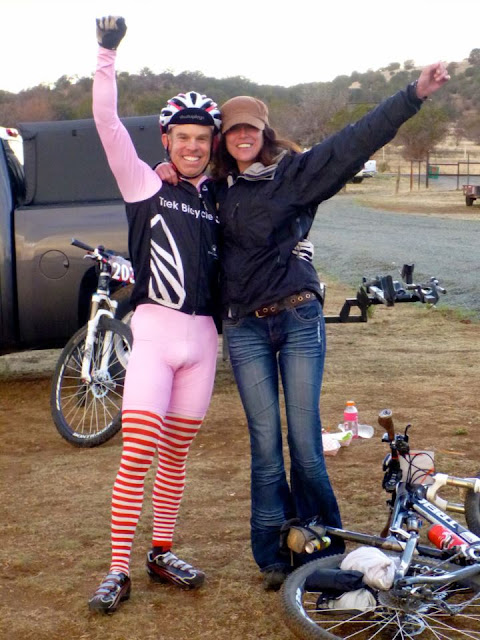 We lapped the field twice early in the race and ended up winning the coed duo by three laps. 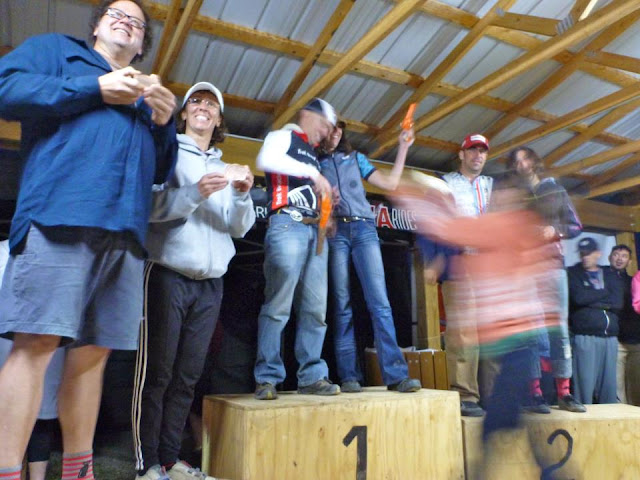 Gold belt buckles were the prize and we also would have stood on the male duo podium in 3rd:

Zia Rides did a fantastic job with this race. Timing was flawless and organized. The race ran smoothly and the awards ceremony started literally 5 minutes after the race end. No waiting around for nothing.

How I wish Zia Rides would have run the chaos that was called the 2011 24-Hour Nats in Colorado Springs! Luckily in 2013, they are.Thank you all at Zia Rides! Awesome job. Awesome race.

And on the way home, we were treated to this: