Dumping a Bit of Garbage...

"We summitted Capitol in 13 hours roundtrip."

My ears literally perked up when I heard Mr. TalkReallyLound on his cell phone in line ahead of me at a grocery store in Aspen. Wheels (my black lab shadow and oldest friend in the world) and I were on Day 4 of a week of freedom in the San Juans and Elk mountains. Final destination of the journey was Moab to meet up with friends to preride the 24 Hour course. I had been riding a few trails in between hiking and living in my tent. This was the first time I had come into town to get food and head back out. I had just stood solo atop Castle, Conundrum, Uncompahgre, Wetterhorn and Snowmass. And, oddly enough, I had not seen another human being on any of the trails leading to the summits. The Front Range 14ers and many of the Sawatch 14ers are always littered with weekend warriors and I was very surprised to only have seen people at my camp at Snowmass Lake and on the road into Castle and Conundrum. I reasoned that it was September and everyone had put their hiking boots back in the closet. Whatever the reason, I really felt thankful for the solitude I was granted over the last four days.

Capitol Peak was really not in my plan for the week. I had never done a class 4 route, but I heard it call as I stood on Snowmass and looked across the ridge of rotten rock so typical of the Elks. And when I heard that two guys did it roundtrip in 13 hours, well, that settled it for me--I was going to summit solo in 10 hours.

I grabbed some food and left the store en route to the trailhead. I inflated my Thermarest, tossed my sleeping bag out under the stars and fell asleep dreaming of the next morning. It was like Christmas Eve when I was ten.

This is what I saw in the distance as I left the trailhead: 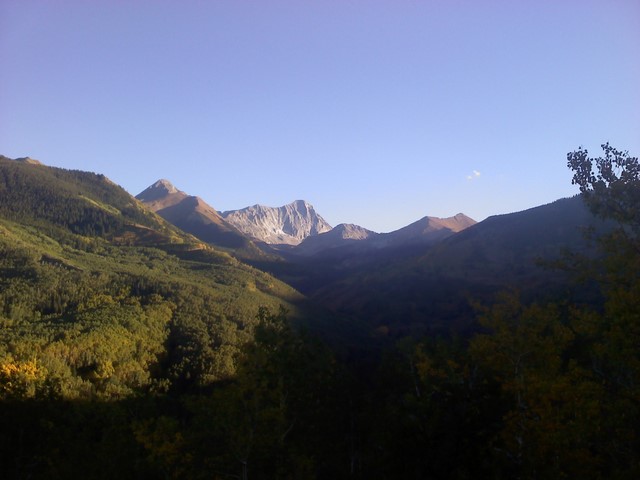 My anticipation turned quickly into adrenaline as I floated through the first 6 miles to Capitol Lake. I stopped only for a brief minute to let the morning light coming through the aspens caress my face. I watched a sunrise that left me speechless.

As I approached the Capitol-Daly saddle, I finally met another living, breathing human. A guy was just coming out from the boulder field and had cut his shin to the bone. I quickly offered some iodine swabs and bandages which he gladly accepted. It was a nasty cut that was the result of misnegotiating a loose boulder. Not uncommon on this route.We quickly talked about the knife edge, an extremely exposed ridge on the way to the summit, and were soon on our separate paths again
.
Capitol Summit from below the saddle:

I was a bit anxious about the knife edge. I had seen many videos and read many trip reports, but always kind of thought it was a bit over-hyped. I was about to see for myself I thought. The next 90 minutes was strickly rock hopping through huge boulders leading to K2, a 13er on the ridge to the summit. I quickly reverted to my 10 year-old mindset and played in the rocks. I came to what I thought was K2 and began climbing. I scrambled up to the top like a little monkey and looked ahead of me. Good Lord, the next part was a purely vertical wall. 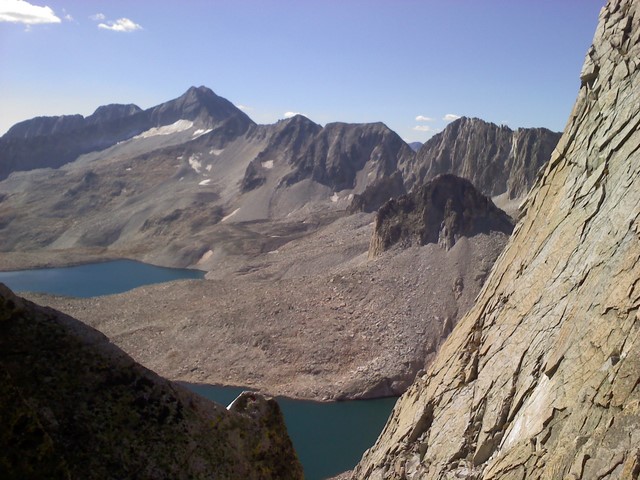 Um, yeah. I was off route. I looked to my right and saw K2. CRAP! I now had to downclimb and continue another 1/8 of a mile to begin scaling K2. I looked down at Pierre Lakes on one side of me and the ice field I had just crossed below me The ensuing downclimb was a bit unsettling. The wind had picked up and my hands were cold. The loose rock was more apparent as I was inching down and I remember looking at my SPOT wondering if I would have to use it. I was in a bit of a predicament, but my logical and collected mind took over and after a few self-scoldings, I was down and en route to K2 in 15 minutes.

This is what I climbed up and DOWN...Note: Do not do this :) 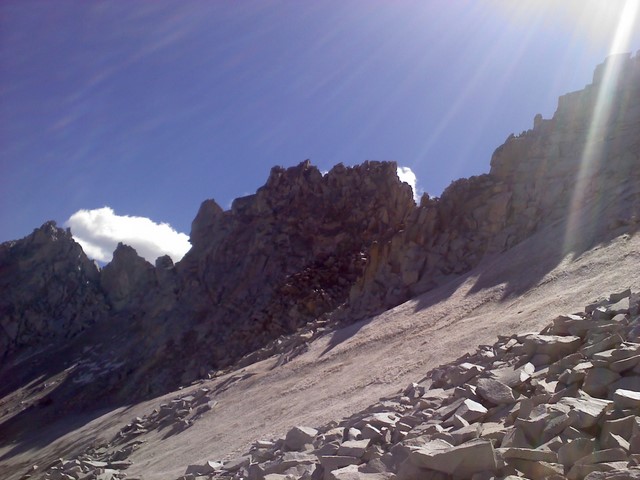 After summitting K2 and taking a few more pictures, the next hour to the summit changed my life. Yah, yah, yah, blah, blah, blah....everyone says this. Each step along the knife edge and on the final pitch to the top was essential. The route is very manageable but I had to remain focused on where I put my foot every time I took a step. The exposure is EPIC (ha, I got the word "epic" in this post too) and the snow and ice in the shaded areas was potentially deadly if I were to slip.

In this hour on the ridge to the summit, all my worries, my old, lingering insecurities, my disappointments and failures from the past slipped on that snow and ice and plunged to their respective deaths. My vibrant, energized, strong, confident self arrived at the summit and I danced in the perfect sunlight as God's fingertips again tickled my face.

This is the knife edge: 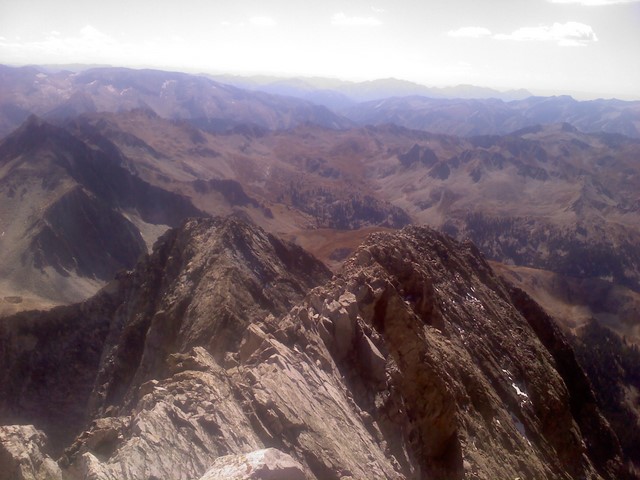 This is what I saw looking east from the middle of the knife edge: 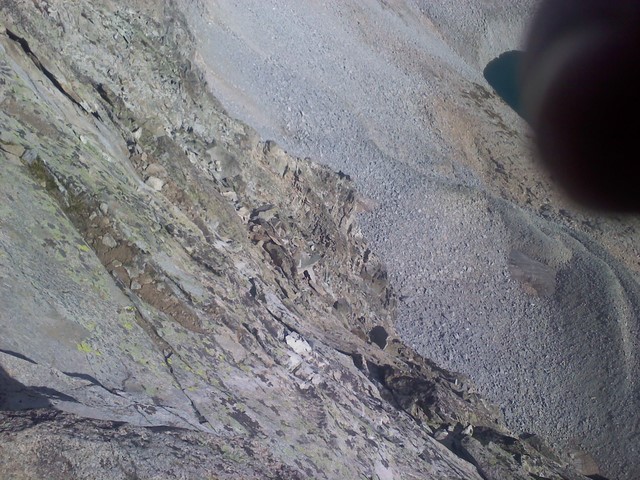 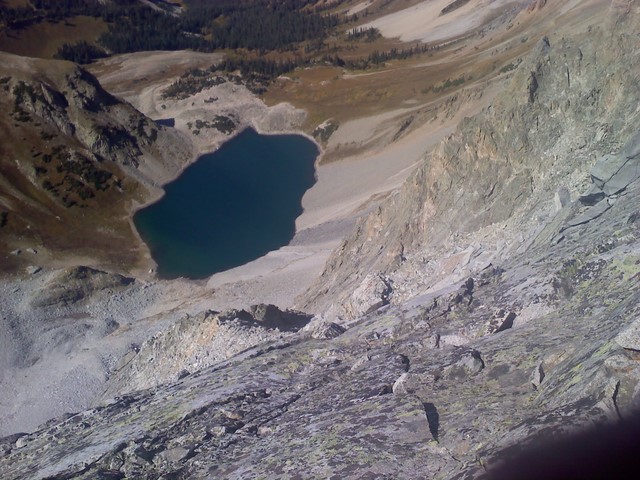 Looking back at K2: 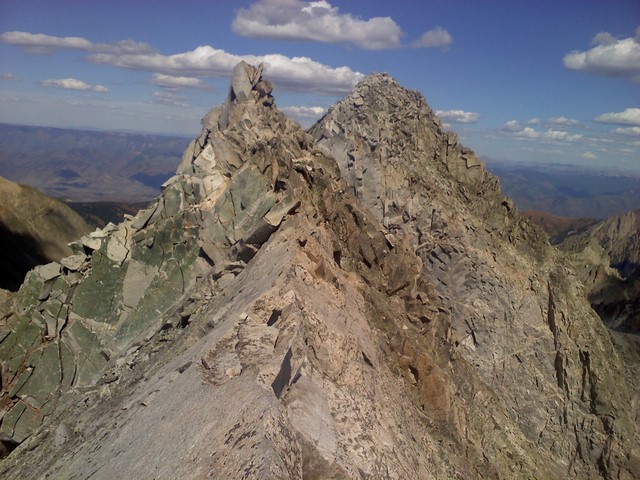 And the summit from K2: 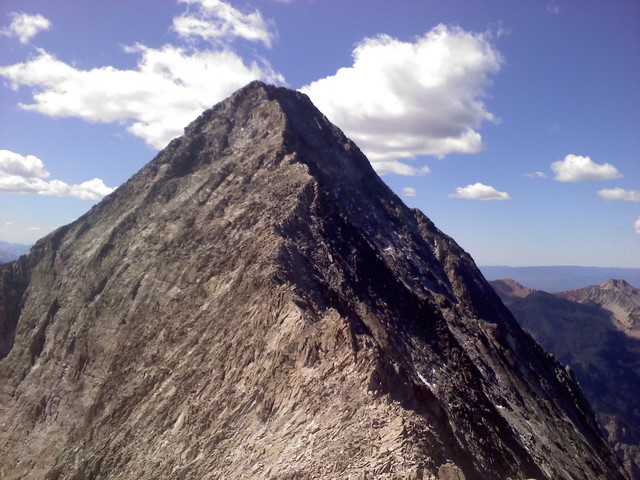 And looking at the summit block: 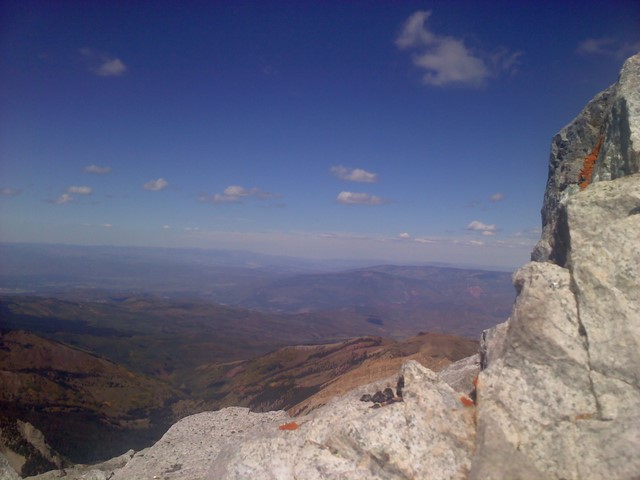 I sprawled out and soaked up as much of the sheer majesty one experiences at 14, 130 ft. Having to convince myself that, no, I could not live up here forever, I retraced my journey along the ridge, back over K2, out the boulder field, back to the lake and down the valley back to the trailhead.

Somewhere on the ridge between K2 and Capitol, I dumped the garbage that sometimes keeps me from fully living, feeling and loving. The remaining ashes disintegrated into the thin air on that sunny September day...