I absolutely love and hate the starting line of a race. My stomach physically tightens the exact second my front tire touches the line.I often wonder if there is a direct circuit that connects the rubber to my gut, because it never fails.

The latest race in Angel Fire, NM was no different.This was my third MSC XC race ever and I was racing Cat 2. I took second in Fruita due to a broken derailleur and I wanted the win this time. I was going to jump on it from the start and attack. I was craving some rocky singletrack and I knew there was going to be a bunch of climbing on this course. I wasn't racing until 2pm so I loaded my Superfly on the lift with a couple of downhillers I was traveling with and decided to do some Super D recon work. My lip was still bandaged from three days prior so I was debating whether or not to enter the Super D as planned. I rode it three times and found it to be not that technical. Lots of banked, fast corners through the trees, a couple of fast flat spots and one really steep downhill. Fun riding and very doable, although far from ideal on my Superfly.

I must admit, I kinda missed my old friend I rode all last summer...More travel and that drop post would have been nice: 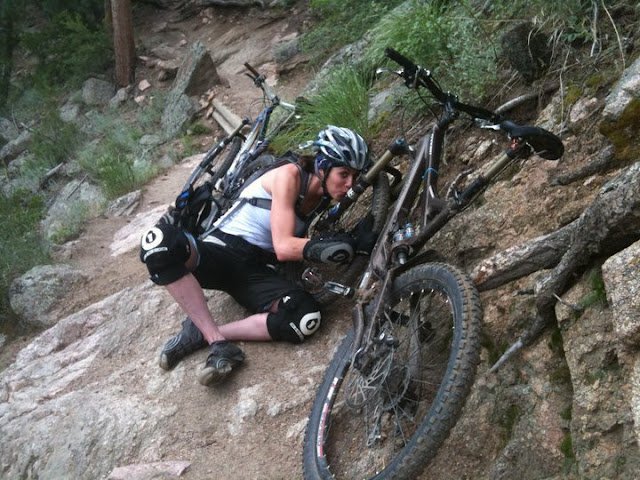 No doubt after riding the course that I was in. I was offered a DH bike to borrow but when I found out that a large part of the XC course was the Super D course, I declined. Practice times ended and I had a couple of hours to eat and get ready for the XC race.

As I warmed up, I felt pretty good. My plan was to go hard right off the line. There was a short but steep hill seconds from the start and I wanted to be out in front. We lined up and watched the men start. There was 5 minutes between each age group for men.

I am generally pretty quiet. Chatter doesn't really interest or calm me at the start line. Sure there are always a few introductions and some small talk but I am heavily focused on channeling my intensity at this point. I looked over at the girl next to me who talked about where she has raced nonstop for the last 10 minutes. Hmmm, I guess that means she is fast? She had five Powergels taped to her stem and she was informing us that her coach instructed her to use all five and she was not allowed to wear a Garmin and see her time. Then she told me how she was going to pass her dad who had started 5 minutes ago...God, I just wanted the race to start so I could have some relief from her constant chatter. People amaze me.

30 seconds. My stomach was doing flip-flops. The second I heard the word "GO" and my right foot turned the crank, all my nerves evaporated. I got ahead quickly and made a hard move left for the inside spot on the turn and began the short climb. I could barely see someone just behind me to the right, so I mashed down. I grabbed a few more gears and tore ahead on the flat road that lead to the first big hill. I was way out in front at this point and actually had the fleeting thought that I had missed a corner or something. I smiled and sped up a little on the approach to the hill. I quickly glanced back to see a girl in a white helmet quite a ways back and a little ahead of the pack.

That was the last time I saw any female on the course. I don't know where the power in my legs was coming from, but I wasn't complaining. I continued to wind up the long, rocky switchbacks, through trees and up about five or six steep climbs. I caught and passed about six men and then grabbed the wheel of a guy who was throwing down a great pace. I knew I was not strong enough to pass him and stay far enough ahead, so I followed him for a long time. The long lap ended with part of the Super D that I knew well and the short lap included a rocky section that was not really a trail it seemed. It was much faster to run through this short section, so I threw my bike up on my shoulder and leap frogged through what was similiar to a river bed---very weird trail! I finished up 14 minutes ahead of the 2nd place woman. My chain came off twice during the race, but other than that, all went well.

I chilled with all my travel partners and we grabbed some dinner and called it a night. I woke up Sunday morning a little nervous not knowing what to expect for the start of the Super D. When I got to the start line, I was kind of intimidated and totally out of place on my 29er with my face all bandaged up.But I honestly didn't care. I was there to have fun with the course and crush out some fear that was slightly lingering from my crash in Colorado three days prior. There were only 14 women total-3 pros-so we all started on the line, two feet on the ground. There was about 30 yards of uphill to the beginning of the course.

GO! It was far quicker to run than try to hop on and ride, so I sprinted out in front and cut left hard to fall in behind two women. Dust was everywhere. I couldn't see the ground ahead of me. I leaned back and let off my brakes and flew. Waaaaay past my comfort level, but I didn't want to get passed. My seat was too high and I just kept leaning back and letting the bike roll over all the rocks. I am amazed I did not go over the bars. I kept the two in front of me in sight and I was determined to hang in and not let anyone get right on me. I thought maybe I could catch them on a long, flat section I knew was coming up. Nope. Damn, they were fast.

I came to a long, steep downhill that scared me. Lean back, let go. I knew if I touched the brakes, I was dead. I was still consuming massive quantities of dust and really couldn't see that great. At the bottom of the hill was loose gravel to the left and big rocks to the right. My wimpy little tires wanted no part of it and went everywhere. My back tire skidded almost out from under me, my front was all over the place and I was sure I was going to leave the mountain on a stretcher. I veered right and miracuously was able to keep the rubber down only to be passed by everyone (I thought). I got back on course and (this has a familiar ring to it) never saw another female until the end.

I was laughing at myself the entire way to the finish line. I think this laughter was to avert my thoughts from what had just about happened. My adrenaline was maxed though and I knew I would be on a different bike next time. A monster had been created. God, that was a rush!

Checking the results tonight, I finished two minutes behind the non-pro winner. I was 9th out of 11. Awww, I was having a good time making fun of myself for being DEAD LAST.. 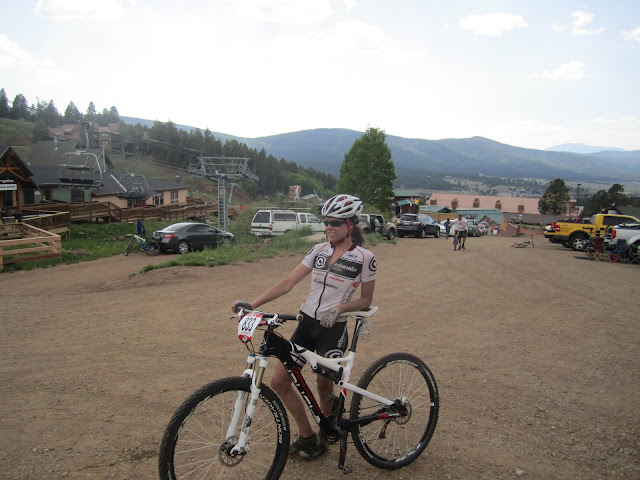 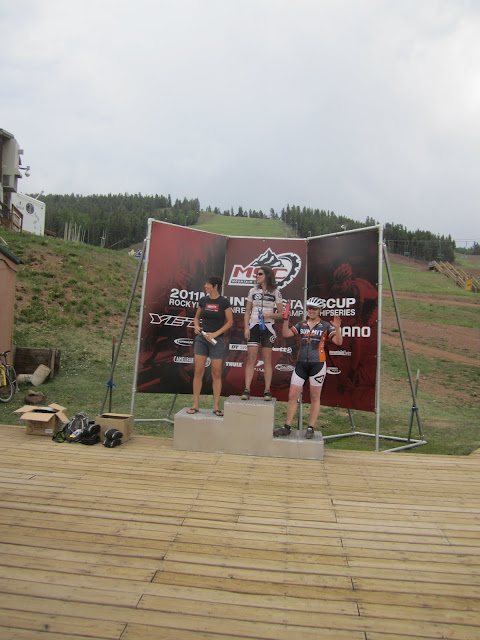 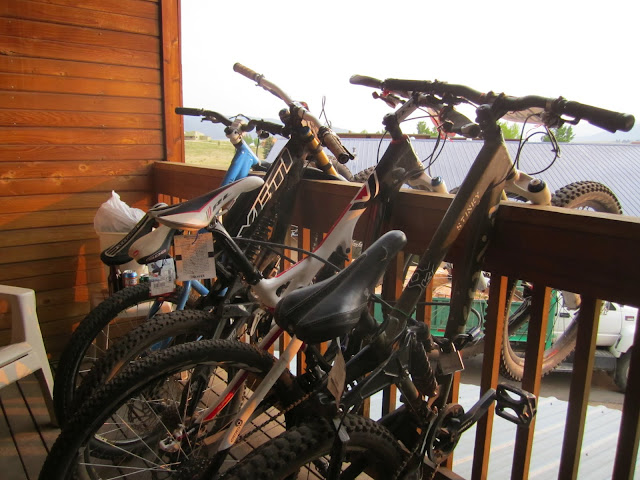 Next up: I decided to forego the Bailey Hundo in favor of 24 Hours in the Enchanted Forest. So back to New Mexico it is. The crappy part of the weekend? 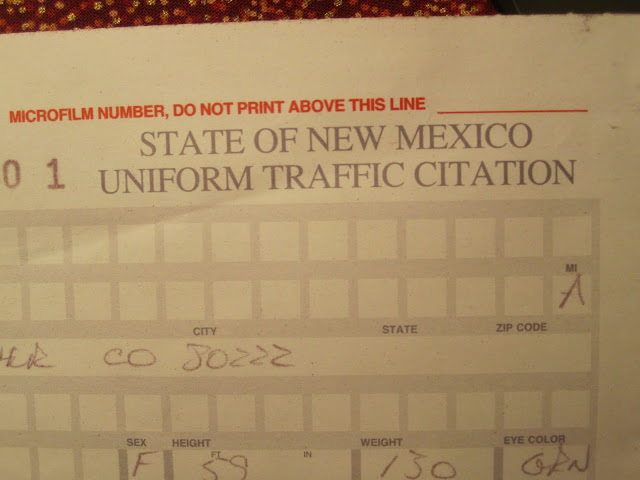