My old, threadbare Oregon Ducks beanie was retired this past Thursday. I have had that hat for too long, worn it too much and it usually appears in every summit picture. Its ugly, its old and should have been thrown away a long time ago: 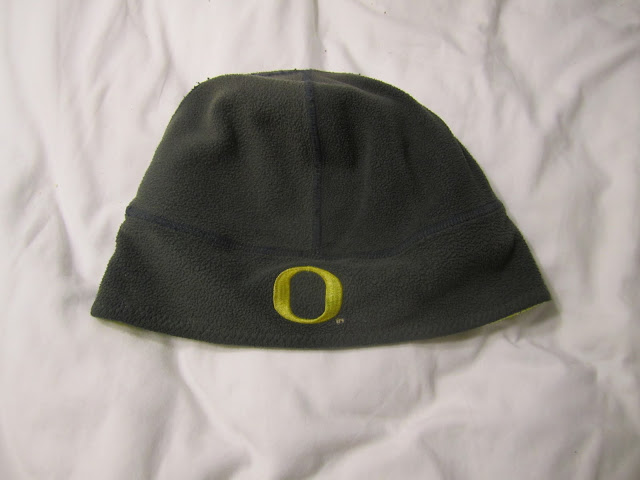 The northwest seemed a fitting place to retire my old friend. What follows is the story of her retirement party held on the summit of Mt. Rainier:


Sunday May 15, 2011
BANG! BANG! BANG! What?! Ugh. Why didn’t my alarm go off?? I reached under my pillow to find my phone in its (recently) all too common place. Once again, I had turned not one, but (yes, really) six alarms off and stowed my phone away. Oversleeping. My one true talent.
The noise was my brother pounding on my front door. He was taking me to the airport to catch a flight to Seattle to summit Rainier. I had been planning this trip with my friend, Steve, since December and the day had finally arrived. I grabbed my pack and gear and we were en route. Again, I slept from wheels up to wheels down and when I arrived at SeaTac International, a typical cloudy, rainy day in the Pacific Northwest greeted me. Steve and Josh, the third member of our summit team, picked me up and after leaving a good chunk of change at REI, we headed to base camp--Ashford, WA.
This small town is home to Whittaker Mountaineering and the base camp for RMI and other guide services. 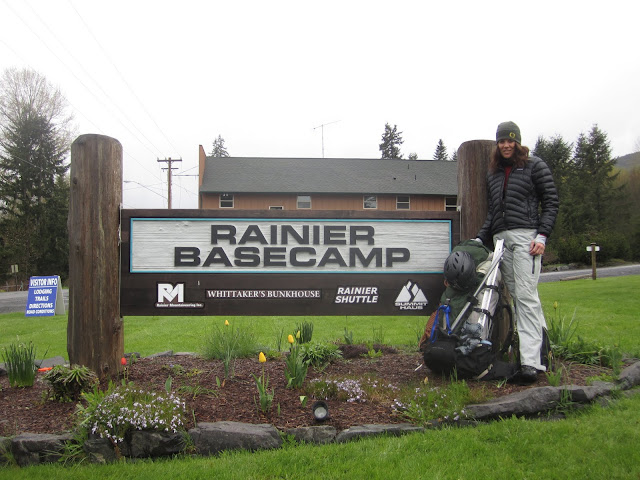 Being unguided, we got a room at the bunkhouse and began gear prep for the next morning’s departure.
We drove into the park to Paradise, secured climbing permits, registered and talked with the climbing ranger.
Game on. I was stoked and ready to ascend. The weather was dreary and the sky was filled with clouds and snow flurries and I had still yet to see this mighty beast I was so amped to climb. We checked weather a few more times that night, and also met some cool climbers, Nick and Ben, with whom we would cross paths several more times. I finally dozed off excited and anxious to begin the journey in to Camp Muir at 10K’ the next day. We knew the weather was going to be snowy and cold and had a few conversations about maybe waiting until Tuesday, but the tentative plan was to start in the morning.


As I drifted off to sleep, I remember thinking how different my life is now from what it was growing up here in the northwest. The moisture in the air was soothing and it was nice to be back in the lush, green forests I knew for so long. 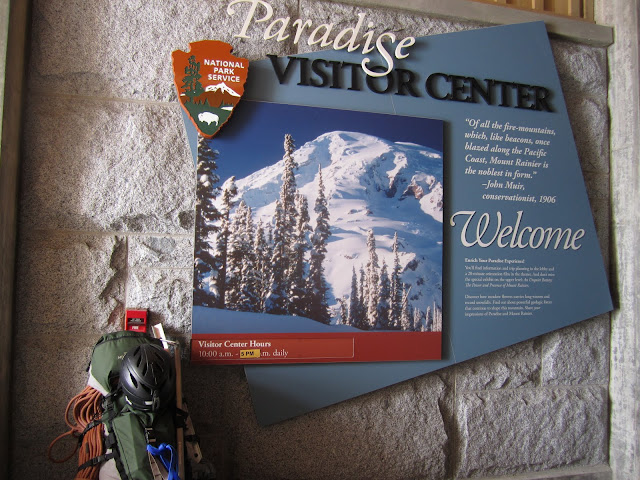 I relied on preloaded waypoints and the wands marking the route. The pace was very slow and took a long time as we trudged on wand to wand, unable to see much beyond 20 to 30 feet ahead. I had still not caught even a glimpse of Mt. Rainier. About half way, Josh was really struggling with fatigue and altitude sickness and visibility was quickly declining. We stopped and dug a huge hole to get out of the wind, fired up the stove and cooked Josh some hot food. After rest, food and rehydration, Josh was ready to push on to Muir. He was also fighting a miserable headache that was affecting his vision. Continuing on again, wand by wand, we climbed for another hour and a half until the wands were becoming harder and harder to find. Josh was feeling worse and the wind and snow reduced visibility to barely 10 feet. My GPS put us at a mere 0.83 miles from Muir, but the wise decision was to bivvy up for the night and let Josh recover and rest. It was really cold and we began digging an enormous hole to set up the tent. 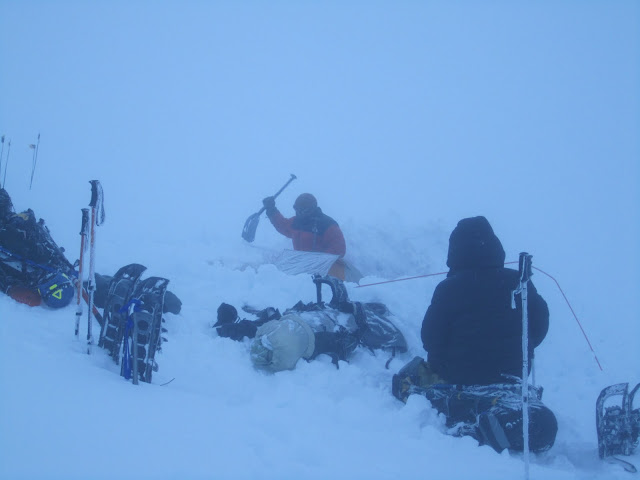 Working quickly and digging through the snow kept me warm and the blood circulating through my fingers. All said and done, we made a pretty sweet crib in the middle of the Muir snowfield. Three people in a two person tent made for a miserable night of sleep for Josh and Steve, but miraculously, I slept really well, despite being smashed up against the tent wall. 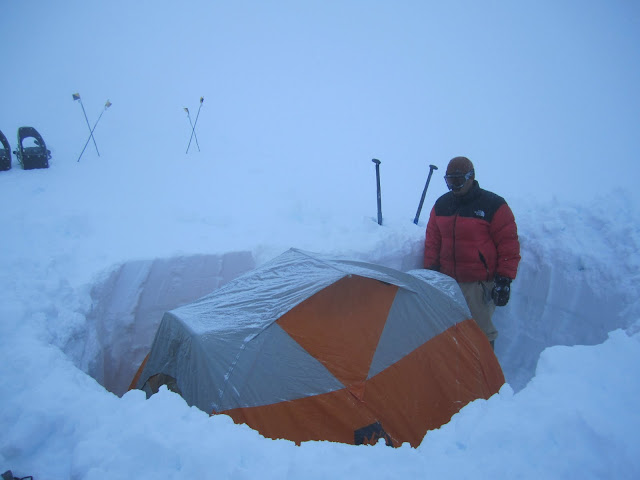 We got a short window late that night where the sky cleared and Gibraltar Rock and the summit became visible in the light of an enormous, full moon. The cloud line looking southeast dropped and we sat in utter amazement at the scene before our eyes. It was like a mystical setting in a medieval fairytale as the moon cast perfect shadows on the snow, the clouds and the peaks of the volcanoes that peered above the fluffy cloud line. None of us could really speak our emotions and just sat mystified by what was occurring on a freezing Monday night in May.
Tuesday, May 17, 2011
Waking to a bluebird day in a four foot hole in the snow put a huge smile on my lips. We took turns thawing out and packing our gear back into our packs.

With another grand to ascend, our route-finding problems had vanished into the crystal clear air. We arrived at Camp Muir soon after departing our beloved snow “cave” and got our spots staked out in the public shelter.

The public shelter was completely full and was an interesting mix of climbers from all over the US. We ran into Nick and Ben again and they quickly found the last two spots. The rest of the day consisted of lounging on the roof in the sunshine, resting, eating, talking with other climbers and watching the guides conduct skill classes for their clients. 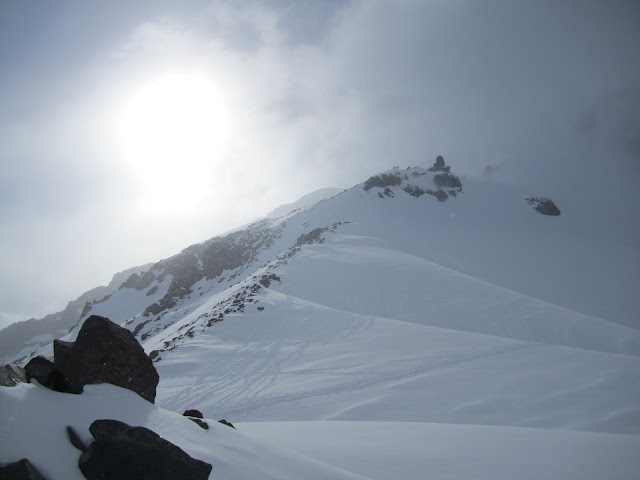 That night was an interesting mix of smells and sounds coming from the 12-15 people in the shelter. 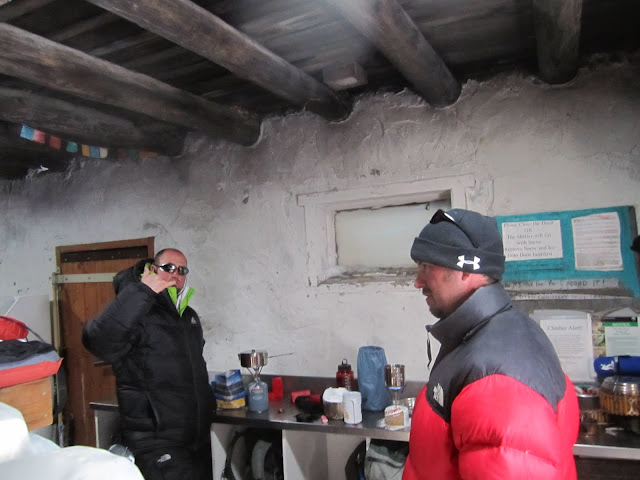 And, in case there is any confusion:  climbers stink. Straight up reek. Ha! With me being one of the chief culprits of stench!
Wednesday, May 18, 2011
Most of the guided groups leave around midnight to 1AM on summit day. The reasoning behind the early departure is due to a presumed slower pace and to ensure the snow bridges across the crevasses are still frozen and solid on the descent. However, we watched a group of guides leave at 8:30AM the previous day and successfully wand the route to the summit. Presuming similiar weather and pace, we based our departure time for Wednesday morning on that group. Josh was still feeling no better and opted to stay at Camp Muir and possibly return to Paradise where the car was parked. So Steve and I roped up, ice axes in hand and crampons tightened to tackle the Ingraham Glacier to the 14410’ summit. Excited to see what was beyond Muir, we set out on the long traverse to Cathedral Gap where the first real ascending began.
﻿ ﻿
﻿Beyond Cathedral Gap, we came to Ingraham Flats Camp. Many of the guided clients stay here for a night in tents to break up length of the climb.
Ascending to 12,500’ we crossed about 4 snow bridges and peered down into the most colossal, beautiful, and DEEP crevasses. The blue color teeming from the cracks is found nowhere else. I gaped in sheer amazement at the intricacy, beauty and delicacy of the patterns in the glacier.
Stopping for a quick snack near 12,500’ we met a guided group returning from the summit. Conversation ensued and one of the guides advised against us continuing due to the unseasonably warm temperatures that could lead to unstable crevasse crossing on the return. A bit disgruntled but still hopeful for a summit bid tomorrow, we concurred. Turning around and starting earlier tomorrow was the safe and wise choice. Falling into a crevasse would have made for a crappy day… J
Thursday, May 19, 2011
2AM. I was up and shaking with excitement. I grabbed my headlamp and tried to be quiet as I crawled out of the shelter. I could feel summit success coming. The stars, moon, and mountain were perfectly visible. No wind whatsoever. About 45 minutes later, we set off again. Looking through Cadaver Gap high on the route we could see the lights of climbers who had started about an hour or two before us. And since there was another group starting from Ingraham Flats, we knew we wouldn’t be the only ones on the glacier. We trudged through the cold darkness of the morning and somewhere around 13, 100’ the sun began to rise in the east and kiss the icy slopes we were climbing. To the west, the moon was simultaneously setting. 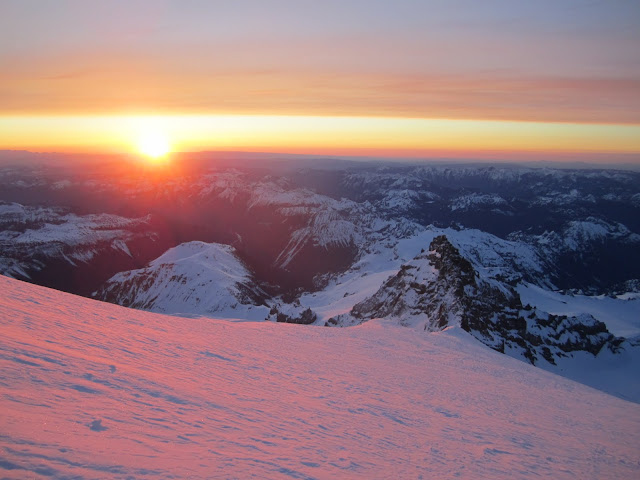 No words I can procure in this trivial blog will ever match the gratitude I hold for being in that moment. In life there are events etched in our psyche for eternity, and this was certainly one of them. Undeniably and unquestionably. 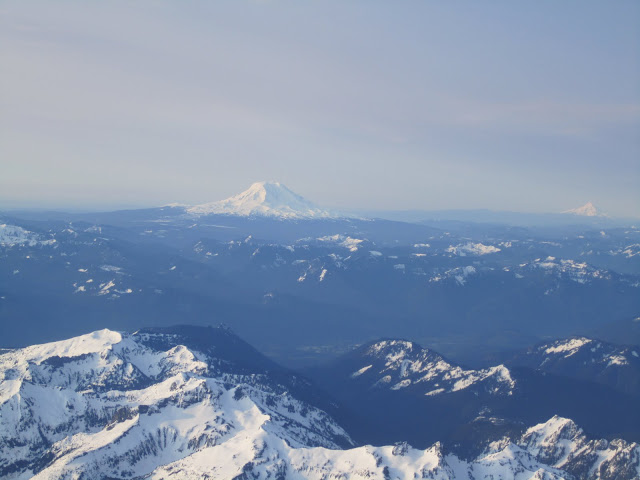 The temperature kept dropping and we kept climbing. The route was not a technical challenge, however one crevasse crossing, I would venture to say, was the crux of the route and became very steep immediately after stepping across and provided for some fun scrambling. We kept winding up the slopes until we came to the summit crater. Absolutely surreal. 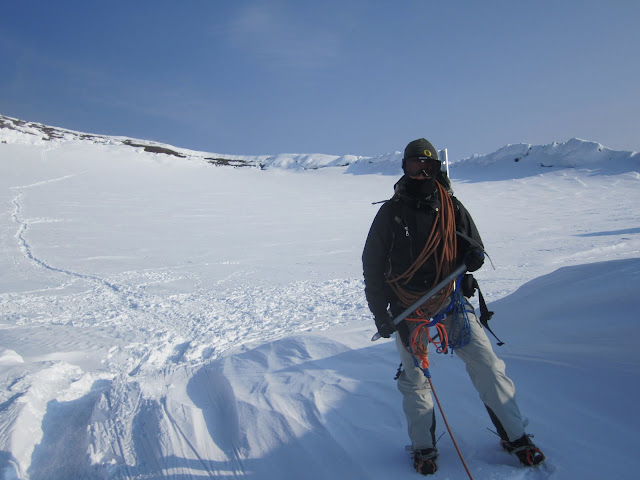 Dropping packs and easily floating along the short trail that bisected the crater, we reached the true summit of Mt. Rainier. 14410 feet!!!! YES! 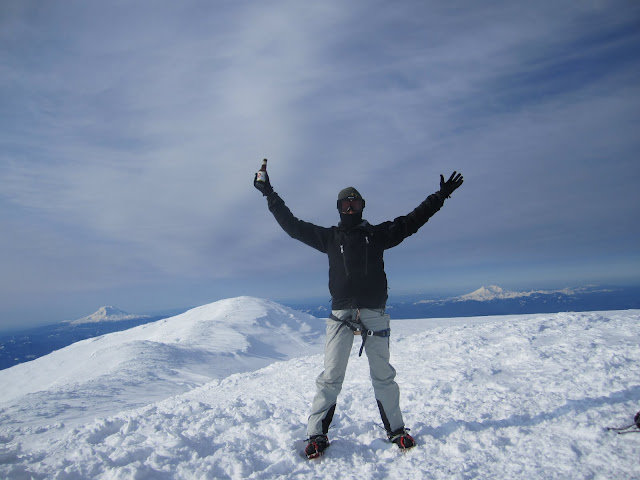 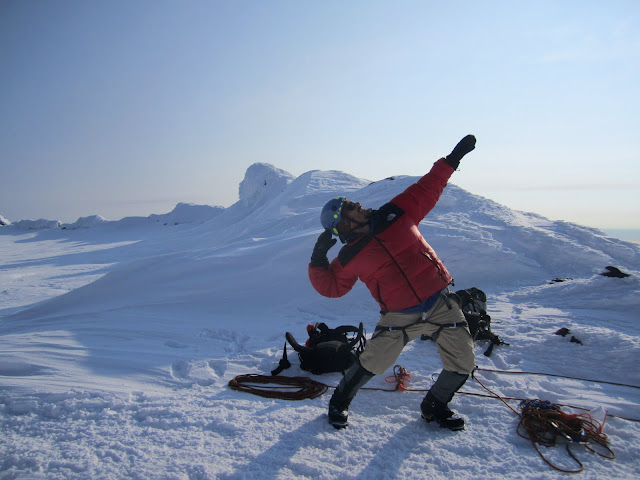 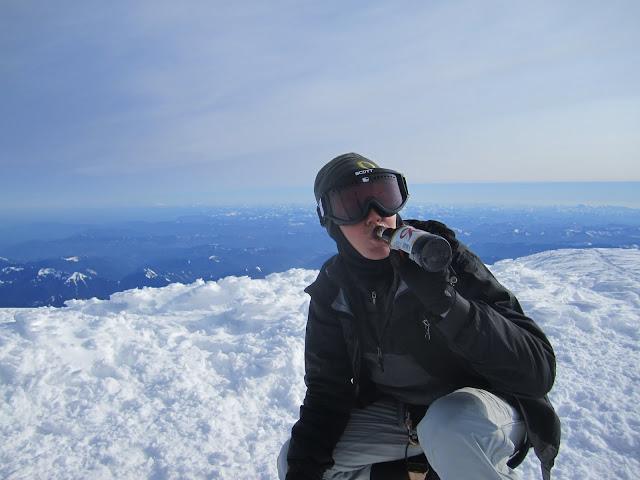 Mt. Adams, Mt. St. Helens, Mt. Hood and Mt. Jefferson were all visible to the south and we marveled at the Olympic Mountains to the north. The cold wind froze my fingers, but I didn’t care. My lungs inhaled the purest, sweetest air and my mind was clear and aware of the one, precious life I have been given to pursue my lust for EPIC.